Adam and Christ By One Man

In each of the first four examples in our series on Faithful Family Legacies, we have seen how they all continually pointed forward to the work of Almighty God in our Lord Jesus Christ. 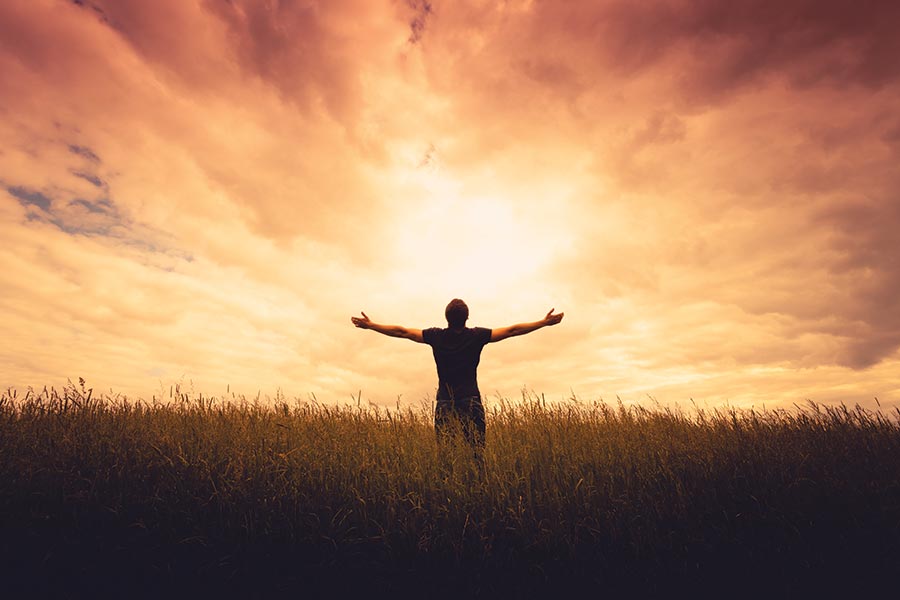 Listen to the audio version of this article

This is not just because Christ is “before all things” (Col 1:17), the one around whom God framed the ages (Heb 1:2) and the word of God made flesh (John 1), but also because the legacy that Christ began is the most important of all.

To truly appreciate the legacy of Christ, we must build it in connection and contrast to the work of another legacy, that of Adam, right back at the start of Scripture. This is not an obscure link but rather one carefully and definitively directed by God through His inspired word.

For as by one man’s disobedience many were made sinners, so by the obedience of one [man*] shall many be made righteous. (Rom 5:19, Compare v. 15).

Paul is showing us that to understand the power of the legacy of Christ, we must see how he came to reverse the consequences of another legacy begun in Adam. The Scriptures don’t want us to miss this vital connection about how in both circumstances, the “one man” brought consequences that impacted the “many” who come from them. This parallel is to show how God works His principles through a representative family head (federal head), and this method will bring amazing blessings to those who come to see God’s ways as just and right.

Just note the key parallels and contrasts that scripture paints in this summary table: 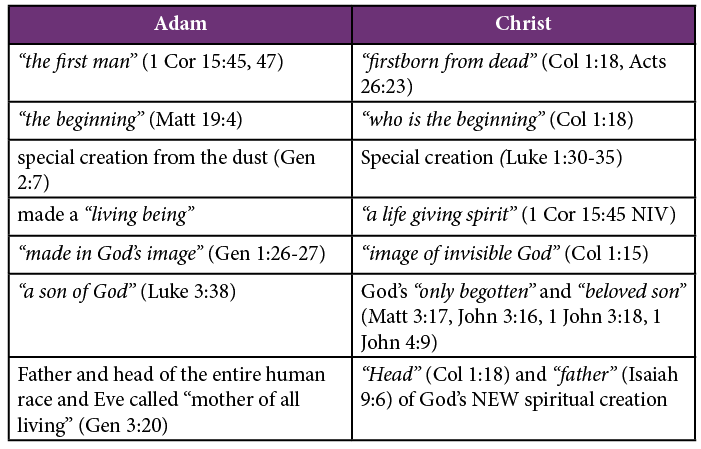 The Divine contrast between Adam and Christ is seen when we see the legacy that each brought. In both Romans 5 and 1 Corinthians 15, we have the key exposition of these principles.

We must understand this is not just because Adam is a figure of Christ. Rather, Scripture is making us see the vital significance of how death came into the world, that it is related to why Jesus had to bear those consequences and how he overcame them!

To understand the legacy of Adam that Paul describes, we must go back to Genesis 1-3. When God first created, He looked upon His creation and declared it to be “very good.” This means that each aspect of God’s creation was initially fit for the purpose for which He created it.

For mankind, this meant they were created with the moral capacity and physical attributes to reflect God’s image and likeness. God wanted to develop these in man and for them to have dominion over creation (Gen 1:26-28), filling the earth with His glory.

Sin, however, entered the world and was to change all of that. The serpent, although “very good,” was not a creature God designed with the capacity for spiritual reasoning. Its “subtle,” perceptive or observant features (Gen 3:1) were not an evil characteristic (Matt 10:16), but it was still limited. The serpent did not have moral sentiments. When it spoke from its own resources, it became the father of a lie because there was no truth (moral capability) in him (John 8:44).

Adam and Eve, who did have the capacity for divine thinking, should have stayed true to their God’s word. Eve, being utterly deceived by the serpent’s logic (1 Tim 2:14), took the fruit God had commanded them not to eat (Gen 2:16-17). In Genesis 3:7, we see that only after adopting the serpent’s carnal thinking, Eve “saw” the tree in a way she had never seen before. It had awakened in her a desire for that which God had forbidden. Adam, although not deceived, stayed silent, failed to enact his God-given leadership, and also took the fruit and ate it. As such, sin entered the world “by one man,” for Adam was responsible.

Can we imagine how God felt about their betrayal? God’s word had been dishonored, His glory reproached, and His creation marred (Psa 69:7). Their “eyes being opened,” they knew by experience “good and evil.” Trying to cover themselves (Gen 3:7), they felt the consequences of sin on their bodies. Many lusts had been awakened and orientated by sin, which continued to influence them.

God’s sentence had made them mortal, dying creatures.

They were ashamed and conscious of the experience of evil and its effects on them. Sin had broken the relationship they had enjoyed with God (Isa 59:2). Furthermore, by divine judgment, they were now made subject to death (Gen 3:17-19). God’s sentence had made them mortal, dying creatures.

In Romans 5, Paul shows that if we understand how death came into the world, we can then see how Jesus will reverse the consequences of sin and share eternal life with us. Here the legacy of the first man, Adam, came to be overcome by a new legacy in Christ. Paul says in Romans 5:12, “By one man came sin and death by sin, so death passed through to all men, for that all have sinned.”

The climax of this is found in Romans 6:9, where we are told that even Jesus came under the dominion of death, which was a consequence of sin. This is important because if we understand how sin and death entered the world through the head of mankind’s natural family, Adam, then we can see Paul’s connection to how sin and death will be removed through the head of God’s spiritual family, Jesus Christ, who bearing the legacy of Adam came to defeat it!

The fall in Eden has left mankind mortal and prone to sin. Death had become their enemy, and only God could and would save them from destruction. God displays His amazing wisdom and power in the method He chooses. God planned to enforce His just and necessary law against sin while providing a way of redemption through it. He is truly “A just God and a Saviour.” (Isa 45:21).

This is exactly the “good news” God promised in Genesis 3:15. Although “enmity” would now exist between the two, and their seed, God would ultimately crush the serpent and its sting. This prophecy shows how important it was for them to see God’s words’ relevance to them personally and their posterity. Here spoken to the serpent is the promise that God would provide one from Adam’s race (“in Adam”), born of a woman (the “seed of the woman”) who would come bearing Adam’s legacy, to battle and crush sin, to reverse its effects. Jesus was going to be “made a curse for us” (Galatians 3:13), and so “bore our sins in his own body on the tree.” (1 Peter 2:24). In so doing, he created a new life-giving legacy.

Here is why death became an “enemy” and why Jesus had to go through it to bring salvation.  The death that came by sin could only be conquered by one who would first submit to it (Heb 2:14).  Jesus came with the very same fallen nature that bore sin’s consequences, and being strengthened by God, he could “crush” sin in the very nature it had “reigned unto death.” (Rom 5:21).

And although he would suffer a wound in “his heel,” it would only be temporary, for he would rise out of death. Therefore, this is why Jesus had to come under the dominion of death. Romans 6:9 was the result of sin that entered the world by man!

We can truly appreciate the power of God’s victory in Jesus Christ and the legacy he must have on our life. Adam was the head of the human race, and the disabilities that came from him as a result of the fall were shared with his posterity. This situation is their misfortune, not crime. Even Christ was in Adam (Luke 3:38) to share sin’s consequences.

But Jesus was to become a new head, in contrast, of a family who could share the blessings he won over sin and death. This amazing hope is expounded in Romans 5:15-18 and 21: “By the obedience of one shall many be made righteous,” “even so might grace reign through righteousness unto eternal life by Jesus Christ our Lord.” (v. 21).

Paul’s point is that we innocently partake of the consequences of Adam’s sin, having not committed his crime (or are guilty of his crime). In the same way, we share and partake of the victory Christ’s obedience has gained, even though we have not or can achieve Christ’s perfect righteousness! God is right to deal with us according to these federal heads.

In Christ’s life and ultimately in his death, sin was conquered, and the body of sin destroyed. (Rom 6:6). Jesus could not have destroyed sin in himself if our nature did not bear sin’s consequences. In a figure, God made Jesus, “who knew no sin to be sin for us.” (2 Cor 5:21) in the sense that he came in the “likeness of sinful flesh” (Rom 8:3) or the flesh that sin came to have dominion over.

This did not mean Jesus was a sinner; he was sinless, “made sin for us who knew no sin.” (2 Cor 5:21). It is the figure of a tyrant who came to rule, as sin did over man. But Jesus bore that same nature to break its power.

The amazing victory over sin was not just in his death but also his life. He died to represent all who had sinned and could not offer the perfect sacrifice. As our representative, he died a death of condemnation of men (Luke 23:40-41), the “just for the unjust.” (1 Pet 3:18).

Such a moral victory had won over sin. Jesus “loved righteousness and hated iniquity” (Heb 1:9), so his perfect life was honoring to God.  Because Jesus was God’s Son, he could be sinless, for he was uniquely strengthened (Psa 80:17, Rom 1:3-4).

For this reason, Scripture records how God is the victor and savior. “I [God] will ransom them from the power of the grave; I will redeem them from death: O death, I will be thy plagues; O grave, I will be thy destruction.” (Hos 13:14). Paul says, “Thanks be to God, which giveth us the victory through our Lord Jesus Christ.” (1 Cor 15:57, compare 2 Cor 5:19).

It was Jesus’ sinless life that meant the grave could not hold him (Acts 2:24, Heb 4:15). Adam’s sin had brought death, but now the events in Eden were undone. For if the “sting of death is sin,” and Jesus was sinless, then “O death where is thy sting? O grave, where is your victory?” (1 Cor 15:55). Jesus’ death had conquered sin, breaking its reign, and a hope of resurrection made possible to be shared with us all. How amazing our hope of resurrection is! How wonderful is this new legacy in Christ!

In studying these two legacies, we see that Christ’s is not only the most amazing but our hope, comfort and strength. Christ bought a legacy of forgiveness, redemption, and resurrection. To be a part of this, we do so by faith, baptism, and a life lived by the power of Christ’s life in us (Gal 2:20). May we always stay connected to Christ’s legacy as we faithfully await his return. “Even so, come, Lord Jesus.” (Rev 22:20).