In Acts 11, starting at verse 19 we read about a new church, formed out of persecution—Antioch. 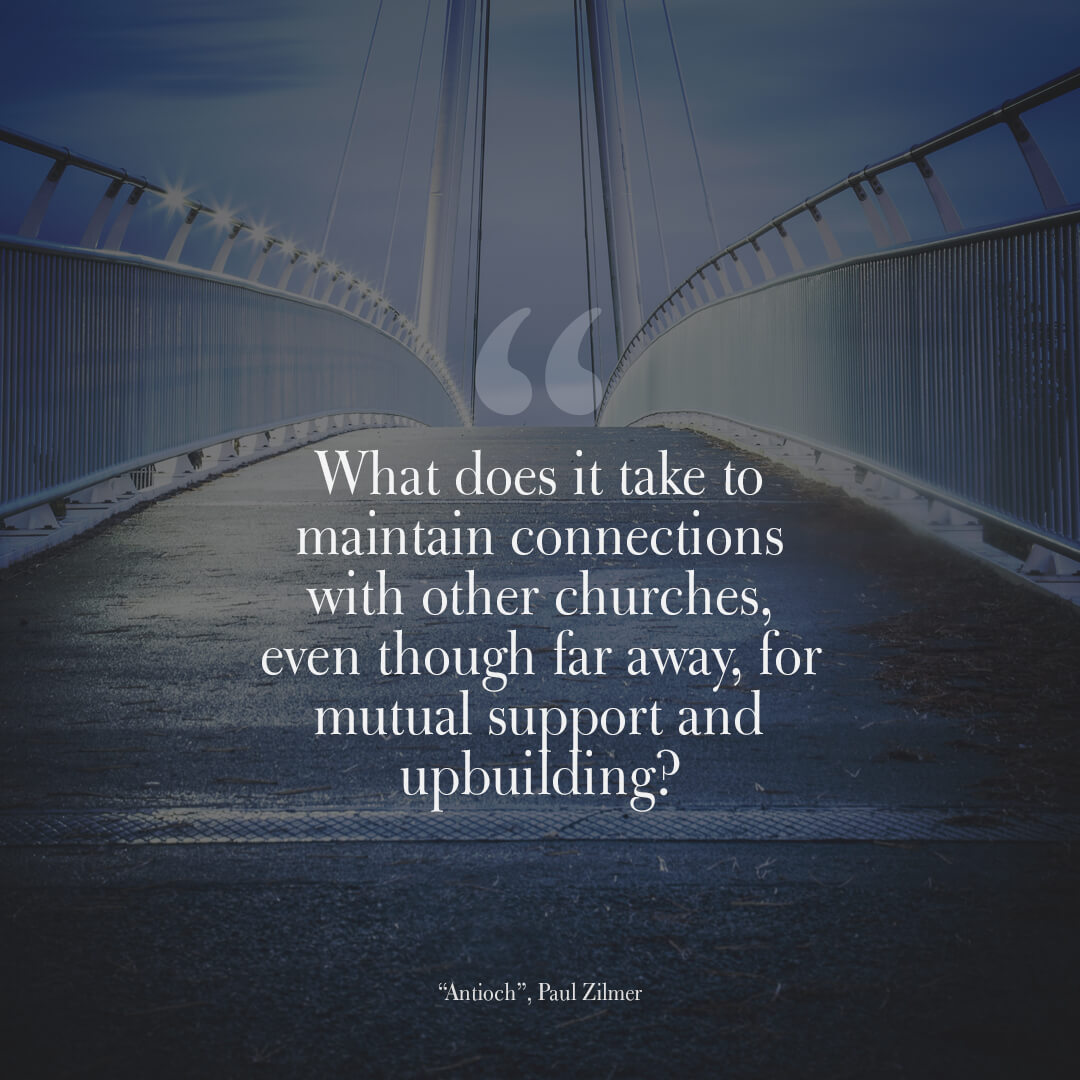 There is perhaps a partial fulfillment here of Jesus’s pronouncement, “Blessed are you when men persecute you…”  If it were not for the persecution, this church wouldn’t have existed, and a lot of good would not have come about.

At Antioch, we’re told, the believers make the very first direct approach to Gentiles, proclaiming the gospel for the first time to non-Jews.  This is something Jesus had directed his followers to do right before his ascension (Acts 1:8).  It’s in this place the followers of Jesus are first called “Christians”—which may be a derogatory label initially, but is embraced by the believers.

Barnabas, who is so often involved in the work of reconciliation, is sent by the Jerusalem church to make sure this far-away church stays connected.  He likes what he sees a great deal.  So much so that he not only decides to stay, but he goes and finds Saul of Tarsus and brings him to Antioch too.  Barnabas and Saul eagerly join in the work of this new church, and are sent as couriers of financial aid to Jerusalem—continuing to support the inter-church connection.

In chapter 13, the Holy Spirit directs, through inspired prophets, that Barnabas and Saul be sent out to further expand knowledge of the gospel.  Far from reluctant, the church is actively involved in “sending” these designated preachers.  What does that entail, “sending”?  We’re told they pray and lay their hands on them—which sounds like some kind of ritual, but I suspect today we would say they embrace them, take them by the hand, put their hands on the men’s shoulders—in other words encourage them, convey their support and love.  And there are practical aspects to “sending” as well—financial support for sure.

Saul (who becomes Paul) will later write, “How then will they call on him in whom they have not believed? And how are they to believe in him of whom they have never heard? And how are they to hear without someone preaching? And how are they to preach unless they are sent?” (Romans 10:14-15)  “Sending” preachers (encouraging and supporting them in many ways) is just as crucial as having willing preachers themselves.  Antioch will be Paul’s home base for all the rest of his ministry as a preacher, until his arrest in Jerusalem.  This church’s support isn’t a one-time thing. They keep on sending.

When the big showdown comes over whether Gentile believers had to be circumcised, Antioch sends Paul and Barnabas to Jerusalem to help sort it out (Acts 15).  The two return with great news and the church rejoices—of course they do!  They’ve been at the forefront of the gospel’s expansion all along.  Accompanying Barnabas and Saul back to Antioch are two other prophets.  One of them is Silas, who like Barnabas is so taken with this church that he stays, and in fact becomes the one sent with Paul on his second mission trip.

There’s more, but I’ll leave it to you.  The story of this church speaks (or should speak) powerfully to every one of us.  If I can be so bold, I’d suggest a group study might have value.  Here are a few discussion questions you might explore:

You will come up with additional questions to discuss.  God bless you as you do!