It takes vulnerability and bravery for someone to raise questions that go against the grain.

By LEVI GELINEAU AND SAM TAYLOR 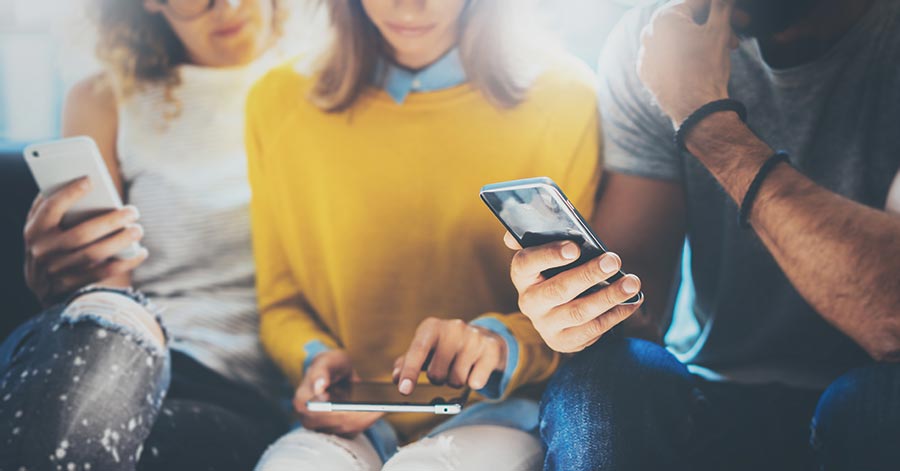 When certainly slips into pride, we lose. I am from the first cell phone generation. My parents bought me a cell phone at age 16, which was about as fast as anyone could buy their children cell phones in the early 2000s. My parents were a part of the first generation of Christadelphian parents who had to ask themselves, “Should we get our child a cell phone?”

They just didn’t have the frame of reference to understand the temptations we would eventually face. It would have been like explaining airplanes to the ancient Greeks. Today, I would suggest that cell phones were the true beginning of the information/disinformation age.

Since cell phones became internet accessing devices in the mid-2000s, my generation and the following ones have grown up with exponential exposure to the sum of human knowledge in the palm of our hands. To say the least, it’s been an enormous leap in the human experience.

Smartphones and the internet have been a boon for the Christadelphian community by making our worldwide community more tightly knit together— not only through social media but through the abundance of information that helps us to affirm and share our beliefs with the world at large.

It has been an inevitable leap for humankind. Although there are specific and obvious temptations that come with internet access, I would argue the most dangerous threat from the internet presented to our youth today is the free exchange of ideas. Generally speaking, the Christadelphian community has failed to fully respond.

Young people today are growing up in a time of astonishingly rapid exchange of theories and world views. Just as the invention of the printing press led to the Protestant Reformation and the Age of Enlightenment that furthered the development of humanistic philosophies, the advent of the internet has led to an Information Revolution in the 21st century at a more accelerated pace.

Young adults coming of age in the world today need to find their position on a host of morally challenging questions—ones that challenge everyone in our community, no matter their age, experience or level of Biblical understanding. To say that this can be overwhelming to children and teenagers is putting it lightly.

While difficult questions on politics, science or sexuality can destroy a fledgling faith on their own, how they are addressed in our Sunday Schools, CYCs and families represents a hidden danger that can further erode a young person’s trust in their family, community or even the Word of God itself.

The Christadelphian community has an exemplary heritage of devout study, “search[ing] the scriptures daily” (Acts 17:11), and making “our calling and election sure.” (2 Pet 1:10). While these are essential principles that help develop a godly character, they can feed our confirmation biases and promote echo chambers if not properly tamed.

We can all likely think of a talk or point offered during Bible readings that, while presented as fact, turns out to be little more than conjecture beneath the surface. We must bear in mind that no matter how confidently a point is presented, nobody knows everything about the Bible.

While for some, an air of confidence can be encouraging, its certainty can also lead to many of our members—from the young to the aged—feeling belittled or marginalized for having a question that others present as if it’s “already figured out” and “not worth asking.”

This method of presenting what we claim to know doesn’t invite people around the table for conversation but forces them away to find a place more welcoming—one that doesn’t have their spiritual wellbeing at heart. Dogma exudes pride.

This pride can greatly compound the possible damage of these worldly ideas. When a person is struggling to reconcile a modern theory or lifestyle with Biblical teaching, and we don’t have the well reasoned Biblical answer prepared in a humble way, we run the risk of isolating them from the wisdom the Bible offers, entrenching them in morally relativistic thinking.

It takes vulnerability and bravery for someone to raise questions that go against the grain. We do them (and ourselves) a disservice by responding to a plea for dialog with pontification and worn-out responses. We must be better than this. Our brothers, sisters and those unbaptized in our ecclesias are looking to us to rise above only what we grew up hearing. What can we do?

Our encouragement to each member of our community is to be open to discussing any topic with each other. We implore all members of our ecclesial family, from the youngest to the oldest, to be vulnerable enough to ask and answer questions in a way that seeks genuine answers, rather than affirming our respective biases.

Peter explained the correct attitude to embrace in 1 Pet 5:1-5 (ESV):

So I exhort the elders among you, as a fellow elder and a witness of the sufferings of Christ, as well as a partaker in the glory that is going to be revealed: shepherd the flock of God that is among you, exercising oversight, not under compulsion, but willingly, as God would have you; not for shameful gain, but eagerly; not domineering over those in your charge but being examples to the flock…Likewise you who are younger be subject to the elders. Clothe yourselves all of you, with humility toward one another. God opposes the proud but gives grace to the humble.

Although we should never compromise the truth, we must balance that uncompromising mentality with a desire to “grow in the grace and knowledge of our Lord and Savior Jesus Christ” (2 Pet 3:18) when difficult questions are raised.

The teenager with doubts is no less a child of God than the elder who doesn’t have pressing questions. In many cases, there are unambiguous, Biblical answers and principles we can reach together. Yet, we can not effectively bring our young people there in a culture of absolute certainty.

ask with a genuine desire to understand

It’s up to both the old and young to make the change they want to see in our community together. This situation is not about “us vs. them,” but rather “us and them vs. the problem. It is the responsibility of the older to acknowledge the difficulty and bravery it takes to ask a question and to recognize the person asking is not the problem.

Paul exhorted the ecclesia at Corinth in 2 Corinthians 10:3-5 (ESV):

For though we walk in the flesh, we are not waging war according to the flesh. For the weapons of our warfare are not of the flesh but have divine power to destroy strongholds. We destroy arguments and every lofty opinion raised against the knowledge of God, and take every thought captive to obey Christ, being ready to punish every disobedience, when your obedience is complete.

The younger has a duty in this as well. It’s important to understand that just because “there is nothing new under the sun” (Eccl 1:9 ESV), that doesn’t mean older members have been confronted with these difficult questions directly before. It’s important for those with questions to not ask from a place of defiance or contrarianism but rather from a place of genuine desire to understand.

How difficult questions are approached is just as important as the questions themselves. When asking or being asked difficult questions about faith, based on worldly theories and ideas, keep yourselves in the love of God above all. Make our ecclesias and our dining room tables safe places for these conversations, not an impenetrable fortress to keep hard questions out.

God is a refuge to all those who want to draw near; faith challenging questions aren’t somehow separate from the people having them. Our Father’s truth will not be misused or misrepresented; we must have faith that He will see that to be true.

Thus says the LORD: “Cursed is the man who trusts in man and makes flesh his strength, whose heart turns away from the LORD. He is like a shrub in the desert, and shall not see any good come. He shall dwell in the parched places of the wilderness, in an uninhabited salt land. Blessed is the man who trusts in the LORD, whose trust is the LORD. He is like a tree planted by water, that sends out its roots by the stream, and does not fear when heat comes, for its leaves remain green, and is not anxious in the year of drought, for it does not cease to bear fruit.” (ESV).

Whether we admit it or not, heat and drought will come into our lives and the lives of those growing up in the Christadelphian community. Our role as God’s children is to help His other children know we are all in His family and working on these human problems together.

People will have to reconcile these seemingly conflicting ideas one way or another—with us or without us. Let’s help each other grow a community that waters and nourishes with the Word of God, rather than oppress and wither through the sin of flawed certainty.

Let’s truly embrace our role in a community that works out problems like those in Berea, searching the Scriptures to see if something is true. If we do this, then we could all be as mighty trees in the garden of God, receiving nourishment from His Word and offering shade to those seeking refuge from the oppression of this life.

The word “culture” is not found in our Scriptures. But we are all familiar with the term and how it is applied. Culture shapes the way we think and how we react to the world around us. It guides how we discern what is right or wrong, normal or abnormal. It provides a blueprint for processing of information.
Continue Reading
Reflections