Modern technology has given us an explosion of new ways to display our selfishness, anger, and pride. But it did not create any of these sins... [and] nowhere in the Bible is this more on display than in the Book of Job. 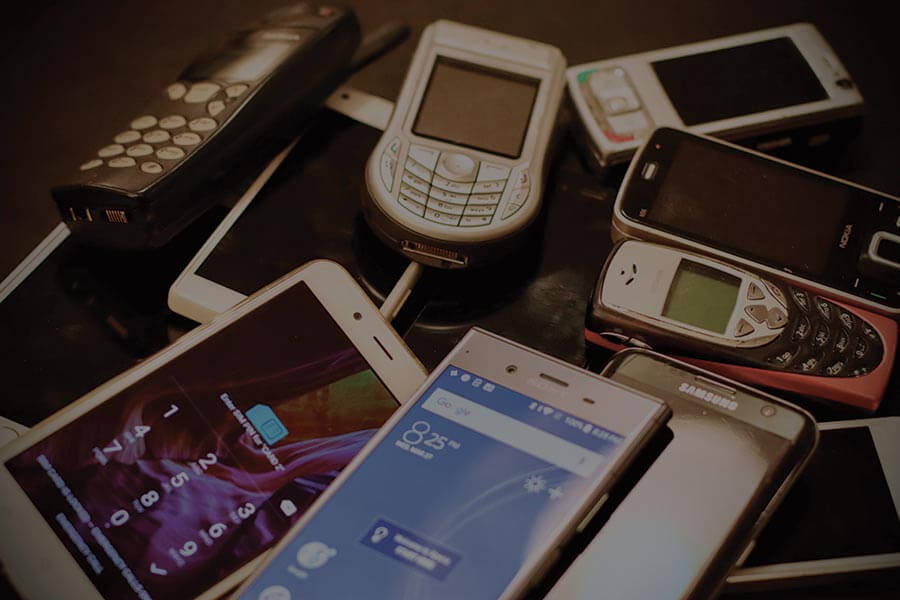 People in the 21st century have a dizzying variety of ways to communicate in our global digital age. We place calls on landlines or cell phones. We participate in video calls and virtual meetings. We receive emails, texts, and direct messages on any of a dozen different apps and platforms that we feel compelled to check constantly. We post on various social media sites, then respond to and react to the posts of others. We leave comments, and product reviews scattered far and wide online and interact with other commenters and reviewers. Some of us even enjoy the old-fashioned pleasures of communicating through cards, letters, and visits with friends over coffee.

But it almost goes without saying that this surplus of methods has not necessarily made us better communicators. Mass communication has facilitated gossip and slander and made it much easier to proliferate. Misleading information and outright lies online have become problems for which even national governments can’t find solutions. The harsh cruelty of internet comment sections has become legendary. And the subtler sins of pride and envy keep us all presenting an idealized, “curated” version of our lives that leaves everyone less connected and more unhappy.

Far from improving communication, the 21st century keeps creating new terms for all the ways we hurt each other with our words—“trolling,” “cyber-bullying,” “cancel culture,” “man-splaining,” “humble-bragging,” and “fake news.”

Of course, all of this is an old, old story. What may surprise us, however, is to realize how very old a story it is. Modern technology has given us an explosion of new ways to display our selfishness, anger, and pride. But it did not create any of these sins. Thousands of years ago, men and women found ways to cause pain through communication, with no Internet in sight. And perhaps nowhere in the Bible is this more on display than in the Book of Job.

Clearly, the Book of Job is not a treatise on communication. The book leads us through massive theological questions about who God is and how He works in our lives. However, it is also true that most of the text is made up of human beings communicating with each other.

And, mostly, these people do a rather poor job of communicating. Perhaps they had never heard of the term “trolling,” but it is easy to spot instances where one of the men in the story makes “an intentionally provocative statement to cause an outsize reaction in a hostile situation.” As they grow more and more annoyed at each other for the “patronizing explanations of concepts the listener already knows,” modern readers readily recognize “man-splaining.”

So, what can 21st century believers learn from the communication missteps of our brethren from thousands of years ago? Quite a lot.

First, it is worth noting that they are consistently described as “friends.” These men had a history together before the events that caused such antagonism. They are all presented as thinkers and debaters. It is likely that, in happier times they enjoyed getting together for long discussions about points of theology. These friendships were so solid that these men would spend a week of their lives just sitting with Job in his sorrow.

However, the dramatic events he experienced were provoking doubts and questions in Job that the others could not cope with. Whatever theoretical or abstract debates they had engaged in before, now things were more real. Friendly disagreement gave way to bitter sarcasm and cruel insults. Though they initially came to comfort Job, all three quickly lost track of that purpose in their drive to prove themselves right and Job wrong.

Both sides of the debate were wrong!

And it is not at all clear whether their relationship survived the ordeal. Job obeyed the LORD and prayed for his friends at the end of the book. But the men seem to be left out of the final scenes of rejoicing when Job’s brothers and sisters, and acquaintances appeared with comfort and gifts. Though they had arrived with good intentions, they allowed angry self-justification to overcome both the reason for their visit and perhaps their whole relationship. If it is true that the harsh debate over theological differences did destroy these men’s friendships, perhaps that is a sad lesson in itself.

It is even more poignant when we remember that both sides of the debate were wrong! They all shared the same unchallenged wrong doctrine of retributive justice. The three friends assumed Job was being punished for a specific sin and insisted–in increasingly spiteful ways–that he repent. Job also assumed such suffering could only stem from major sin and demanded an opportunity to prove his own innocence. Even Elihu, at the end of the debate, took for granted that divine justice on sinners will be evident in this life. In fact, the only one who has next to nothing to say about God’s retribution is God Himself.

Perhaps there is a subtle suggestion that, far too often, we humans are arguing about the wrong things. Perhaps, when brothers and sisters debate, both sides are intensely mistaken in their assumptions, so much so that no one in the debate can fully recognize the truth. Perhaps, when we choose sides in these complex questions, we are merely choosing between something deeply flawed and something else even more so.

Perhaps one side will eventually deserve three chapters of divine chastisement and repent in dust and ashes, and the other side will need their cowed brethren to make sacrifices for them. At the very least, it should cause us to approach all such disagreements with far more humility. Not that we should give up in our efforts to lead others away from error. But that we should do so with the humble recognition that we ourselves could be wrong in ways we have not yet begun to imagine.

But even those in deep error can raise important and worthwhile points. It is interesting to re-read the early speeches of Job’s friends after reading about Job’s ultimate reward in the epilogue. Many of the exact predictions they made about how God would reward the righteous were fulfilled, some quite precisely. And Eliphaz’s instructions to not despise the LORD’S discipline (5:17) are picked up in Proverbs and again in Hebrews. Is it difficult for us to accept that someone we disagree with so profoundly can have something to teach us? Perhaps that is another of the lessons Job and his friends can help us learn about communication.

But, of course, the majority of the words Job’s friends say are both wrong and unhelpful. In fact, most of their actual claims are made in Eliphaz’s first speech. There are hardly any new arguments in what the other friends say, or in Eliphaz’s later words. In fact, the only thing that does change as the speeches continue is the tone. It does not take long for reason and patience to be replaced by aggression and sarcasm.

By the middle of the book, both Job and the friends are beginning each discourse with a few verses of calculated insults before even attempting to make their points. As he starts his second speech, Eliphaz almost seems to realize their discussions are making no headway and perhaps serve no purpose (15:1-3). But then he goes ahead with a full chapter of mostly repeating himself, beginning another round of more of the same.

Why is it that we as humans keep doggedly persisting in an argument, long past the point where it would do any good? Is it a lack of self-awareness–not admitting to ourselves that we have become too annoyed or emotional to have a positive effect? Or is it simply pride, the certainty that I alone have the eloquence that is needed? Whatever the reason, it is tempting to wonder how much better off everyone would have been if Eliphaz had taken his own advice and let go of the argument twenty chapters earlier.

But it is also true that the friends’ unhelpful words did provoke Job to learn and grow, though not in the ways they had hoped. After two full rounds of speeches by each of his friends, Job comes to the startling insight that there have been gaps in his theology. In chapter 21, fully halfway through the book, Job suddenly realizes they have all been wrong. The wicked do prosper in this life! (v. 7-26) This is really the only move away from the doctrine of direct retribution in the entire book. Of course, none of the others acknowledge Job’s insight, though perhaps the fact their speeches grow noticeably crueler indicates that on some level, they realized he was right.

Job’s relationship with God shines through on every page.

This is not the only time the friends’ words pushed Job in an unintended, yet positive direction. Of the eight speeches Job makes in response to his friends, at least five of them are not directed to the men but to God. The friends’ words, unhelpful as they are, prompt Job not just to new realizations but to prayer. Job began the book by praying for his children and ended up praying for his friends. In between, he spent chapter after chapter pouring out to God his sorrow, anger, and hurt. Job’s relationship with God shines through on every page. Job, it should be noted, is the only one in the narrative who does pray. How might these discussions have been different if every character in the story talked to God more than they talked to each other?

In summary, the Book of Job stands first as a meditation on theology but also as a profound cautionary tale about human communication. Here are a few of the principles of communication that are illustrated in this strange, thought-provoking narrative. In any situation where communication becomes strained or tense, perhaps Job can lead us to the questions we should be asking ourselves:

May God give each of us the grace to learn to communicate better, both with Him and with each other!

(With thanks to my teenage daughters, Eve and Prisca Brinkerhoff, for help with this article.)

Subscribe
Login
0 Comments
Inline Feedbacks
View all comments
Editorial
Communication
All too often, our modern communications are seasoned with venom, not salt. Waging war by e-mail, Facebook, Twitter, or any other of the electronic tools spawned by the internet has become routine, even, unfortunately, sometimes within our community. And this is only one of the problems we see today.
Continue Reading
Editorial

Perhaps, as a community, we should re-evaluate how we view the single members of our body.
Continue Reading
Exhortation and Consolation

In our reading from the prophet Isaiah, in chapter 51, we find a beautiful message of comfort from God to His people Israel.
Continue Reading
Exposition

The Lunatic in the Cemetery

This is one of the most horrifying stories in all the gospel record.
Continue Reading
Reflections