About a week ago I was putting the finishing touches on my high school Sunday School class when I realized I had to put aside that lesson. Racial injustice was in the public eye, social media was flooded with views, and it was obvious I needed to talk to my class on the subject. What does the Bible say about racism? 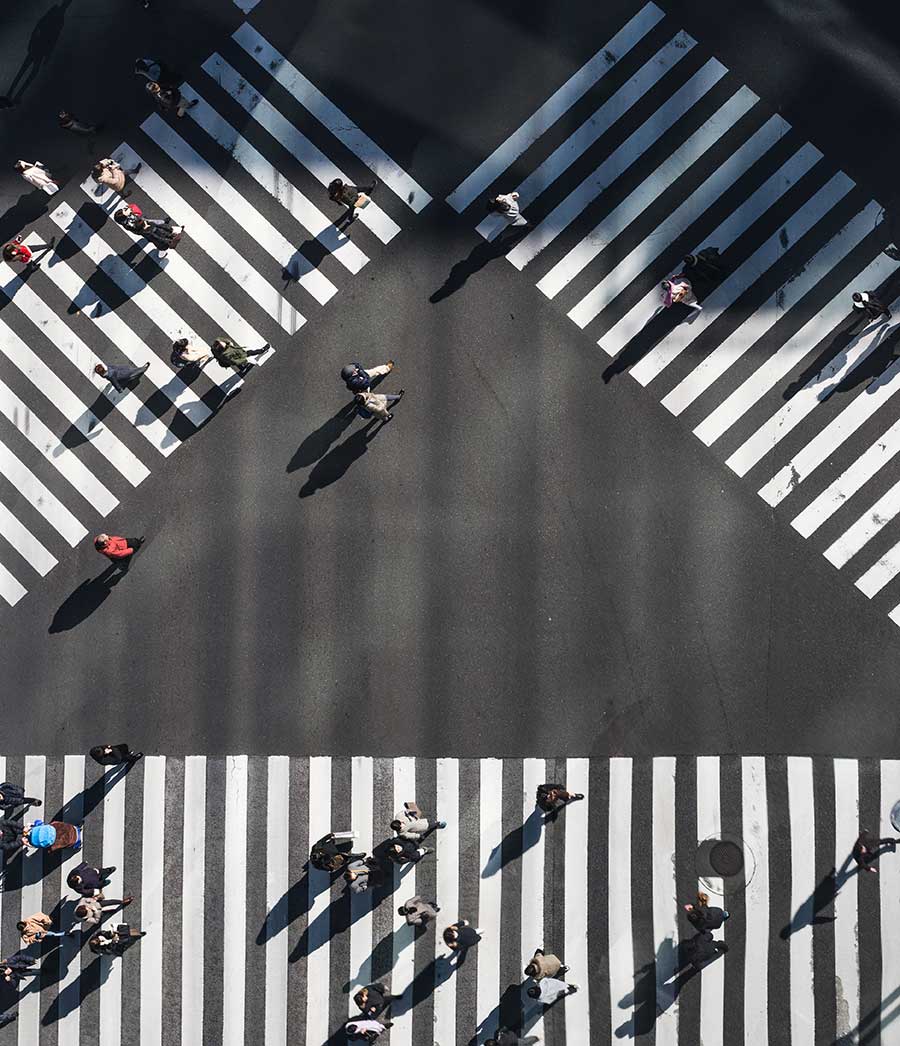 About a week ago I was putting the finishing touches on my high school Sunday School class when I realized I had to put aside that lesson. Racial injustice was in the public eye, social media was flooded with views, and it was obvious I needed to talk to my class on the subject. What does the Bible say about racism? I’d never heard this question addressed directly. But while prayerfully preparing, it became clear this is not a political issue — it is a moral issue, and the Bible has something to say about it.

this is not a political issue — it is a moral issue, and the Bible has something to say about it.I am white and I felt insecure about teaching this class. I haven’t felt the pain of racism but if I didn’t address the subject with the young people, who would? Our class is diverse and our relationship is strong, so we launched into the subject.

God’s word provides practical guidance for every aspect of our lives and it was clear from the students’ responsiveness, they were hungry for the message. The Word of God is living and powerful (Hebrews 4:12). The thoughts and intents of our heart are what influence our actions. These young people want to know what God expects us to think and do! The answer is clear, as the Sunday School class and I discovered.

Feel uncomfortable. Consider your ways. Be transformed and renewed

The topic of racism is emotionally charged, and I imagine I am not the only one who has moments of insecurity when bringing this topic up. Perhaps this discomfort is good; It motivates us to seek a clear view of God’s perspective.

And there is a clear message. One that needs to be articulated for everyone’s sake but especially for our young people, who are looking for guidance. They need to know the Word has answers to life’s toughest questions. They need to know faith is about the way we live. The days leading up to our Lord’s return will be violent and chaotic but we need to know how to respond faithfully. To be silent, in light of the clear teachings of the Bible, is inexcusable.

A Message Deeply Embedded in the Gospel

To be silent, in light of the clear teachings of the Bible, is inexcusable.In the beginning, God created man in his own image (Genesis 1:27). Abraham was given the promise that in him all families of the earth would be blessed. (Genesis 12:3). God gave his son for the redemption of all who believe in him (John 3:16). Having put on Christ “you are all the sons of God through faith and inherit the promises made to Abraham” (Galatians 3:26-29). Being a follower of Christ doesn’t look a certain way on the exterior; God looks on the heart. (1 Samuel 16:7). God is calling out a people for His name (Acts 15:14) from “every nation, from all tribes and peoples and languages.” (Revelation 7:9). God desires that people of all races, cultures, and experiences be part of the bride of Christ.

Fundamental to the character of God is His impartiality

Partiality is the tendency to favor one group over another, unfairly. Fundamental to the character of God is His impartiality. After the giving of the law, God made clear to Israel what He expected of them, because of His character. In Deuteronomy 10:16-18 He told them to

“Circumcise the foreskins of your heart, and be no longer stubborn.”

“For the LORD your God is God of gods and Lord of lords, the great, the mighty, and the awesome God, who is not partial and takes no bribe.”

Notice that the first active quality of God is His impartiality.

“He executes justice for the fatherless and the widow, and loves the sojourner, giving him food and clothing.” (Deuteronomy 10:16-18 ESV).

Despite these clear directives, Israel struggled to reflect the character of God. Even Samuel had to be told “The LORD sees not as man sees: man looks on the outward appearance, but the LORD looks on the heart.” (1 Samuel 16:7). At another critical juncture in time God taught Peter a similar lesson. Right before the rugged Jewish fisherman went to meet the Roman centurion Cornelius, he was given a clear message. Peter was so impressed by the message that despite a lifetime of prejudice, he could exclaim, “TRULY I understand that God shows no partiality, but in every nation anyone who fears Him and does what is right is acceptable to Him.” (Acts 10:34-35). I picture Peter saying this with a sudden clarity like Job’s when Job proclaimed, “I had heard of you by the hearing of the ear, but now my eye sees you;” (Job 42:5). Both marveled at the wonder of understanding, and personally experiencing God’s extraordinary will.

Overcoming the Condition of the Human Heart

It is sadly not surprising that the sin of partiality can continue to impede healthy relationships in ecclesial life. James’ words teach us to recognize bias is inconsistent with faithful living. He describes partiality as a behavior that can end in a guilty verdict:

“My brothers, show no partiality as you hold the faith in our Lord Jesus Christ, the Lord of glory. For if a man wearing a gold ring and fine clothing comes into your assembly, and a poor man in shabby clothing also comes in, and if you pay attention to the one who wears the fine clothing and say, “You sit here in a good place,” while you say to the poor man, “You stand over there,” or, “Sit down at my feet,” have you not then made distinctions among yourselves and become judges with evil thoughts? Listen, my beloved brothers, has not God chosen those who are poor in the world to be rich in faith and heirs of the kingdom, which he has promised to those who love him? But you have dishonored the poor man. Are not the rich the ones who oppress you, and the ones who drag you into court? Are they not the ones who blaspheme the honorable name by which you were called? If you really fulfill the royal law according to the Scripture, “You shall love your neighbor as yourself,” you are doing well. But if you show partiality, you are committing sin and are convicted by the law as transgressors. For whoever keeps the whole law but fails in one point has become guilty of all of it. For he who said, “Do not commit adultery,” also said, “Do not murder.” If you do not commit adultery but do murder, you have become a transgressor of the law. So speak and so act as those who are to be judged under the law of liberty. For judgment is without mercy to one who has shown no mercy. Mercy triumphs over judgment.”
James 2:1-13 ESV

It is very uncomfortable for us to imagine ourselves going before a judge in a court of law and being convicted. But that is exactly the tone of the apostle James when pointing out the seriousness of this sin of partiality. Remember the law in Deuteronomy 10:16-18: the first active quality describing God is His impartiality. What James describes is ugly behavior within the ecclesia. It takes careful self-examination to remove this from our thinking. No wonder God used the image of circumcising the heart in Deuteronomy 10:16. A beautiful contrast to the works of the flesh comes to mind — “But the fruit of the Spirit is love, joy, peace, patience, kindness, goodness, faithfulness, gentleness, self-control; against such things there is no law.” (Galatians 5:22-23).

James moves from speaking of partiality to addressing faith without works. Saying the words “Go in peace, be warmed and filled,” is not enough. Similarly, to say  we’re impartial, but to be indifferent in our actions, is no good. If our faith doesn’t lead to action, it is dead. Jesus said  the things we do are done to him, and the things we fail to do are not done to him. (Matthew 25:40,45).

My white brothers and sisters, if we, like the Levite and Priest in Christ’s parable, cross to the other side of the road, when we see black and brown people wounded and in pain, because, “I saw his pain, I looked at her wounds, but I crossed to the other side of the road because I did not think it would be right for me to get involved,” we must not be surprised if our Master looks on us and says, “Truly, I say to you, as you did not do it to one of the least of these, you did not do it to me.” (Matthew 25:45)

Be transformed: with renewed minds, discern the will of God (Romans 12:2)

“After these things I looked, and behold, a great multitude which no one could number, of all nations, tribes, peoples, and tongues, standing before the throne and before the Lamb, clothed with white robes, with palm branches in their hands, and crying out with a loud voice, saying, “Salvation belongs to our God who sits on the throne, and to the Lamb!” All the angels stood around the throne and the elders and the four living creatures, and fell on their faces before the throne and worshiped God, saying: “Amen! Blessing and glory and wisdom, thanksgiving and honor and power and might be to our God forever and ever. Amen.” Then one of the elders answered, saying to me, “Who are these arrayed in white robes, and where did they come from?” And I said to him, “Sir, you know.” So he said to me, “These are the ones who come out of the great tribulation, and washed their robes and made them white in the blood of the Lamb. Therefore they are before the throne of God, and serve Him day and night in His temple. And He who sits on the throne will dwell among them. They shall neither hunger anymore nor thirst anymore; the sun shall not strike them, nor any heat; for the Lamb who is in the midst of the throne will shepherd them and lead them to living fountains of waters. And God will wipe away every tear from their eyes.” (Revelation 7:9-17)