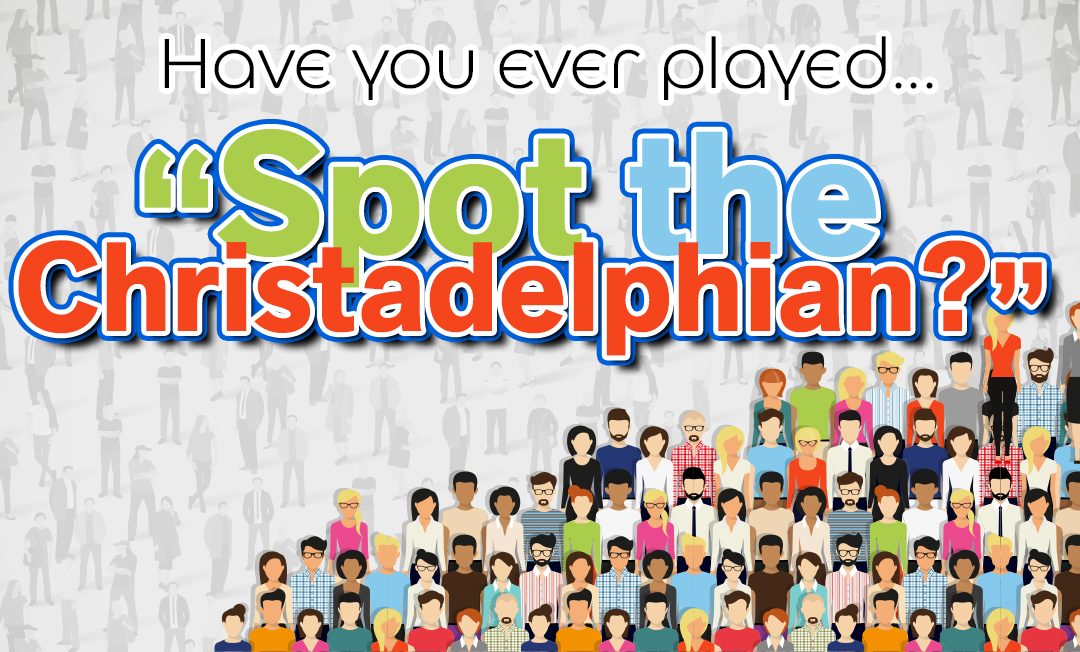 Have you ever played “spot the Christadelphian?” There’s a fair chance that if you are in the vicinity of a Christadelphian hall at 10:30 on a Sunday morning, you can make a good guess as to which of the passing pedestrians is on their way there. The lady in a floral dress and fancy hat? Quite probably. The guy with piercings wearing a Metallica t-shirt? Probably not.

Amusing though this is, it’s a reminder of something more significant: identity markers. I’ll let someone else explain:

“All groups of human beings have a tendency to be exclusive; they want to know who is inside and who is out. So they adopt identity markers – visible practices of dress or vocabulary or behavior that serve to distinguish who is inside the group from who is outside.

(John Ortberg, Pharisees Are Us, https://www.religion-online.org/article/pharisees-are-us-mark-71-8-21-23/)

How is this relevant to the changing face of Christadelphia? Well, British Christadelphians have very well-established identity markers. There are a whole set of values and behaviours, implicit and explicit, that we know and – at least in public – conform to. Some of these are drawn directly from Scripture; others reflect middle-class suburban British culture; and others will be an interplay between the two – for example, an aversion to styles or trends which are seen as somehow counter-cultural and rebellious.

We’re barely conscious of these identity markers until we encounter people who don’t share them. Perhaps someone who joins our ecclesia who dresses differently to us, uses language we wouldn’t use, and enjoys activities we would never involve ourselves in. We might worry that they don’t take their faith seriously or that they are undermining our group identity. We might feel less inclined to talk to them or get to know them, assuming we’re not going to have much in common.

We’re barely conscious of our identity markers until we encounter people who don’t share them.

But just think for a moment from the other person’s perspective. They are likely much more aware of the identity markers than we are. But if they are a new believer from another culture, they have quite a task on their hands navigating these differences.

Which of the markers are simply due to difference in age or background? Which of them are markers of Britishness, and which marks of Christianness? Will people be offended if I don’t share their identity markers? Will it look fake and insincere if I adopt these markers, when I’m not British? How will my family and friends react if I behave differently? Or should I just conform temporarily to whichever group I am with at the moment?

It’s unlikely that people think about these questions consciously. But it may subconsciously affect how people behave. It explains, perhaps, why someone might behave in one way with their British brothers and sisters, and in a slightly different way with their Iranian friends. Or why one person might feel less comfortable with those of their own culture, and another person feel more comfortable with those of their own culture.

Ultimately, our identity is in Christ. As we grow in knowledge and love of him, we will all adopt the identity markers which show us to be his followers. As “we mature to the full measure of the stature of Christ,” cultural and personal differences will pale into insignificance.

Produced by the United Kingdom Persian Preaching News (UKPPN) in their weekly newsletter: Information for Christadelphian ecclesial preaching to Iranians and Iraqis in the UK
UKPPN Dec 4: Identity Markers
https://ukppn.info/

The UKPPN weekly updates are always so thoughtful and well-put. Thanks to the Tidings for picking this up and keep up the good work UKPPN team!