It was very early in the morning. The sun had barely begun to lighten the sky when the old man arose and hurriedly roused two of his servants. Then he went to wake his son. 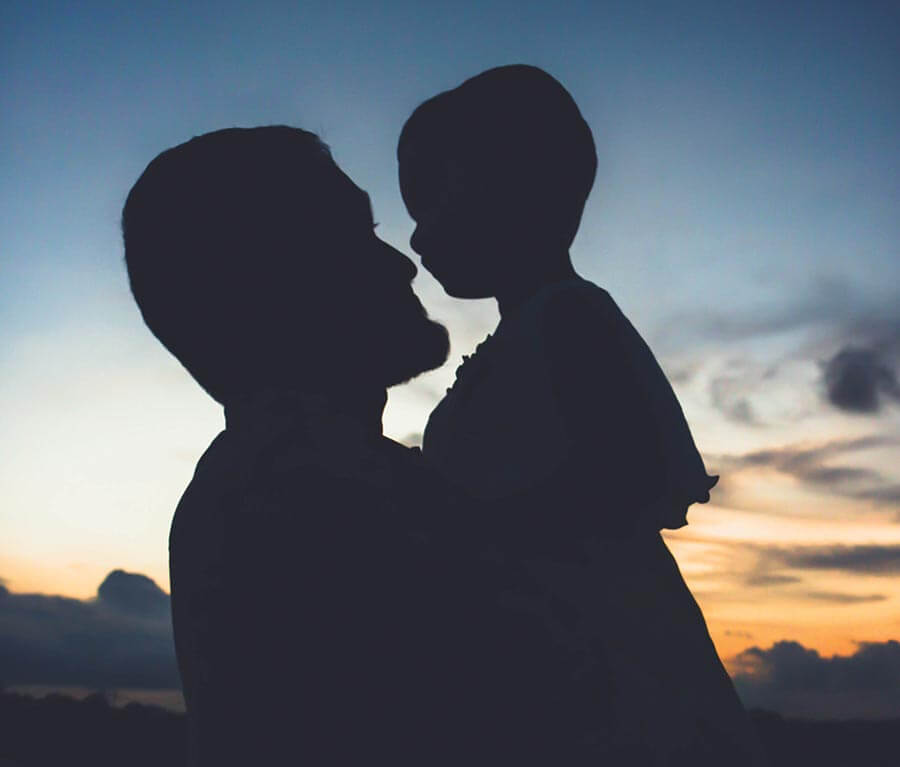 The father and his son—Abraham and Isaac—had a long, three-day journey ahead of them.

It was not an easy journey, not because the terrain was that challenging, but rather because the weight of the task lay heavily on the old man’s heart. On the third day, when he saw the place toward which they traveled, that weight increased greatly.

As the father and his son, now alone but together, began the final leg of this journey, the son turned inquiringly to his father: “My father! Look, the fire and the wood, but where is the lamb for a burnt offering?” (Gen 22:7). 1

God Himself will provide the Lamb.

Those words cut like a knife through the old man’s heart. This was his son, his only son, the son whom he loved so greatly. He responded, “My son, God will provide for Himself the lamb for a burnt offering.” (v. 8).

He shall grow up before Him as a tender plant, and as a root out of dry ground. He has no form or comeliness; and when we see him, there is no beauty that we should desire him. He is despised and rejected by men, a man of sorrows and acquainted with grief …we hid, as it were, our faces from him; he was despised, and we did not esteem Him. … He was oppressed and he was afflicted… He was led as a lamb to the slaughter. (Isa 53:2-3, 7).

Each Sunday morning, we rightly focus on the great sacrifice of the Lord Jesus set before us in bread and wine. We remember his unwavering trust in his Father. We remember his steadfast love to bring about our salvation.

But do we stop to consider the Father? Think about the implications of the following words in the light of the journey of Abraham:

I will mention the lovingkindnesses of the Lord and the praises of the Lord, according to all that the Lord has bestowed on us, and the great goodness toward the house of Israel, which He has bestowed on them according to His mercies, according to the multitude of His lovingkindnesses.
For He said, ‘Surely they are My people, children who will not lie.’ So He became their Savior. In all their affliction He was afflicted, and the Angel of His Presence saved them; In His love and in His pity He redeemed them; and He bore them and carried them all the days of old. (Isa 63:7-9).

If God felt so deeply the afflictions of His people in Egypt, what do you think He felt as He watched His Son—His only Son, the Son whom He loved so deeply—being oppressed and afflicted, and then despised and rejected?

Isaiah wrote he was “led as a sheep to the slaughter.” (Isa 53:7). We understand this as a reference to our Lord’s submission to this painful sacrifice, but do we stop to think about who led him to this place? It was Abraham who bound his only son Isaac and laid him on the altar before he was delivered by a ram caught in a thicket.

Yet this was only a shadow of what our Heavenly Father would do. He would lead His Son and cause His only Son to be bound. He would then have to watch the Son He loved so deeply suffer and die. This painful journey to Golgotha (about 1000 feet outside the Temple entrance) was a journey the Father and the Son would take together. Except, this time, there would be no ram because this son would be the ram.

You may remember how Isaiah said, “The LORD has laid on him the iniquity of us all.” (Isa 53:6). This is not about Jesus acting as a substitute for us. Rather, all the consequences that belong to us were to be experienced by this sinless man! And his Father laid this burden on His Son!

But why? Why did the Father and the Son have to take this journey? Jesus told us that “As Moses lifted up the serpent in the wilderness, even so must the Son of Man be lifted up.” (John. 3:14). What is so wrong in this world of ours that it required the Father and His Son to bear such grief and overwhelming sorrow? Whether baptized or not, we must face head-on this question, however uncomfortable and challenging the answer.

Do you recall how James describes the deceptive and destructive power of human desire? “But each one is tempted when he is drawn away by his own desires and enticed. Then, when desire has conceived, it gives birth to sin; and sin, when it is full-grown, brings forth death.” (Jas 1:14-15). Here’s the problem laid out before us. When selfish desires rule the human heart, evil is always the outcome, and death is the inevitable end.

Listen carefully to Isaiah’s answer to our question: “He was wounded for our transgressions, he was bruised for our iniquities.” (Isa 53:5). This is what is so wrong with our world. No doubt we protest at the finger being pointed directly at us. “I’m not perfect,” we might say, “but I’m a good person. I’m good to other people. I don’t do bad things.” And, we might add, “I never would have been with those who put that innocent man to death!”

Almost as if in response, Isaiah adds one more observation: “We have turned, everyone to his own way.” (Isa 53:6). Just like Judas did! (Acts 1:25). It matters not how good a person we are. Whenever we resist the will of God, whenever we refuse to turn from our own ways to the living God, in essence we tell God “No!” Do you really think we are somehow better than those who condemned and crucified the Son of God?

If selfishness, pride and hard-heartedness did not exist in our hearts, the Innocent and Just One would never have been betrayed and killed. Our willfulness and pride add our own nails to the body of our crucified Lord.

God forbid that I should boast except in the cross of our Lord Jesus Christ, by whom the world has been crucified to me, and I to the world. (Gal 6:14).

At this momentous turning point of all human history, the whole world (including us) truly is indicted for refusal to yield fully and completely to the will of God. In Christ crucified, we have been shown to be the ones who really belong on the cross! If it weren’t for us, our world would not be like it is! If we had only learned the lesson from the beginning! God’s ways really are the best ways.

Think again of this scene. The Father, standing by the side of His Son, giving him up to this horrendous death. Truly, we can say with John: “God so loved the world that He gave His only begotten son.” (John 3:16). The Father and the Son took this awful journey to this place for one reason—that we “should not perish!”

Isaiah 53, further instructs us to, “make his soul an offering for sin.” (v. 10). We are invited to make an open acknowledgment of our sins in repentance, and then to put to death our old life.

Galatians 6:14 puts it very simply. After telling us that he saw in the crucifixion of Jesus “the world crucified to me,” Paul then tells us his response, “and I [am crucified] to the world.” In other words, our response to Jesus’ sacrifice must be to join Jesus on the cross. “Those who are Christ’s have crucified the flesh with its passions and desires.” (Gal 5:24). “Those who are Christ’s” are those who have died with Christ in the waters of baptism (Rom 6).

Here is what this looks like in real life. “You turned to God from idols” [the works of our hands] “to serve the living and true God.” (1 Thess 1:9). In Romans 6:13 (NLT), Paul emphasizes what this should mean. “Do not let any part of your body become an instrument of evil to serve sin. Instead, give yourselves completely to God, for you were dead, but now you have new life. So use your whole body as an instrument to do what is right for the glory of God.”

Our response to the Father then is to put Him first in every part of our lives, giving ourselves completely to Him. This becomes our delight and the goal of our lives. “Father, not my will, but yours” is the watchword of our new lives.

So, we now follow the Lord Jesus as our pattern and guide. He is the one who has shown us what it means to give ourselves completely to God. To him we come gladly to learn the Father’s ways and to serve him with our whole heart.

Then we will see the amazing outcome provided by God for His Son:

When You make his soul an offering for sin, he shall see his seed, he shall prolong his days, and the pleasure of the Lord shall prosper in his hand. He shall see the labor of his soul, and be satisfied. (Isa 53:10-11).

We are told that for the “joy set before him” (Heb 12:2), Jesus endured the cross and despised the shame. Now we know what this boundless joy is. When Jesus sees a multitude of sinners redeemed through their faith in him, he sees the outcome that makes all the “travail [hard labor] of his soul” worth it!

How can this meal we enjoy each week at the Father’s table not become our greatest joy and pleasure, something we gladly put first in our lives?

When we see the Father standing by His dying Son, can we really offer anything less?

1 All Scriptural citations are taken from the New American Standard Bible unless specifically noted.