The Rich Man, Lazarus and Abraham (Part 4 of 4)

We have shown that the teaching about Hades and Abraham’s Bosom is not biblical but rather stems from contemporary Jewish superstition. 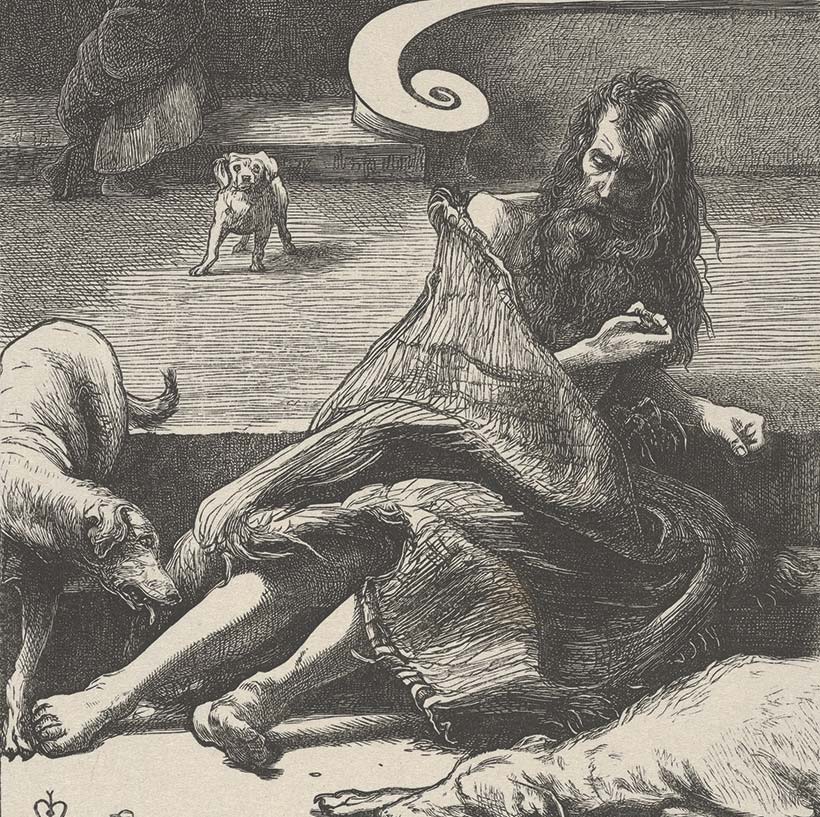 This helps us on the fundamental principle that the Bible does not contradict itself—but creates an even bigger problem: surely Jesus would not approve false teaching?! The idea itself is abhorrent. The answer: “Well, it was only a parable” solves nothing. Even in a parable, we would expect consistent teaching.

It would have been equally possible for Christ to have told the parable in a way that fits with Old Testament teaching. Christ certainly did not need to refer to Hades, the great chasm, Abraham’s Bosom, and “Father Abraham.” (Luke 16:24).1 So, we have to conclude that Christ had a good reason to do so.

Why is the Parable of the Rich Man and Lazarus is so badly at odds with the rest of the Bible?

Another suggested alternative: “Christ was accommodating himself to his listeners to get the message across.” But this also will not do. Admittedly there are examples of Christ speaking to the poor and the simple in terms that they would understand. But never to the disciples, and certainly not to the Pharisees, did Christ “accommodate” his words to false teachings to make other points understood. Neither would his disciples.

Paul even warns about the various Jewish books, such as Apocalypse of Zephaniah, which circulated in the first century: “Pay no attention to Jewish myths.” (Titus 1:14). Yet we still have to explain why the Parable of the Rich Man and Lazarus is so badly at odds with the rest of the Bible.

“IF I DRIVE OUT DEMONS BY BEELZEBUB…”

The answer may be in observing how Jesus dealt with the Pharisees on an earlier occasion. In Matthew 12:22 Jesus heals a demon-possessed man who was blind and mute. But when the Pharisees heard this they said:

Now Jesus could have responded to this slander in several ways. He could have quoted Exodus 4:11 to show that it is God who makes man blind or mute, not demons. He could equally have quoted 1 Kings 18:27 and 2 Kings 1:3 to show that Baal-Zebub, the god of Ekron, had failed to prove his existence in the days of Elijah. But he didn’t. Instead, Jesus counters with irony:

“If I drive out demons by Beelzebul [“Beelzebub” KJV], by whom do your people drive them out? So then they will be your judges.” (Matt 12:27).

The comment “So then they will be your judges” is a powerful rebuke. In saying this, Jesus threw the falseness of the Pharisees’ teaching right back at them. Back in the days of the prophet Elijah, his way of dealing with the prophets of Baal was not much different (see 1 Kings 18:27).

Elijah mocked them to show Israel how false they were. So, if Jesus makes use of Pharisee beliefs in the parable of the Rich Man and Lazarus we need to ask: “Does Jesus confirm them, or ridicule them?”

The first contradiction has already been mentioned. In the Jewish myth, Zephaniah was able to cross by angelic boat from one side of Hades to another. Jesus contradicts this:

“A great chasm has been set in place, so that those who want to go from here to you cannot, nor can anyone else cross over from there to us.” (Luke 16:26).

Another contradiction is that in the myth Abraham, Isaac and Jacob intercede for those in torment in Hades.

“As they looked at all the torments they called out, praying before the Lord Almighty saying, ‘We pray you on behalf of those who are in all these torments so you might have mercy on all of them.’ And when I saw them, I said to the angel who spoke with me, ‘Who are they?’ He said, ‘Those who beseech the Lord are Abraham and Isaac and Jacob.’” (Apoc. Zeph. 11:1-2).

But Jesus contradicts this. Instead, he has Abraham refusing to help relieve the Rich Man’s suffering:

Another contradiction is that in other Jewish myths Abraham is credited with the ability to do what the Rich Man asks (v. 27) and resurrect the dead. For example, in the first-century Jewish fiction, The Testament of Abraham, the patriarch Abraham pleads for the dead and returns 7,000 to the living. “Then Abraham arose and fell upon the earth, and [the Angel of] Death with him, and God sent a spirit of life into the dead and they were made alive again.” (Testament of Abraham ‘A’ 18:11).

But Jesus again contradicts the myths and has Abraham refusing to raise Lazarus: “They have Moses and the Prophets, let them listen to them.” (Luke 16:29). This reflects Jesus’ own condemnation of the Pharisees in John 5:39.

Jesus was showing the teaching to be false by exposing it

There is only one solution left that will explain why Jesus should deliberately choose to tell a parable drawn from the Pharisees’ superstitions. This is that Jesus was showing the teaching to be false by exposing it. And how? By making the main characters in this parable real people: Caiaphas and Lazarus (Simon the Leper?) of Bethany.

According to the Pharisees’ view of the universe, Simon, as a leper (and therefore a “sinner”) should, after his death at Bethany, have descended to be tormented in the fiery part of Hades. Caiaphas on the other hand, would, as High Priest at the very top of the Jewish religious hierarchy, be guaranteed a pleasant welcome by Abraham on the other side of the underworld.

And yet Jesus told them a version of their teaching which had the beggar Lazarus received by Abraham, while the wealthy high priest, clothed in purple and fine linen, descended into the flames. To add “burning coals,” Jesus told how the high priest called on “Father Abraham” to show mercy, and Abraham refused. (The mythical ferryboat across the chasm in Hades was not in service!) Nor was Abraham inclined to help the Rich Man who had enjoyed such a good life on earth (Luke 16:25).

Then, as a final rebuke, Jesus has Caiaphas ask Abraham to send Lazarus the Leper back to the house of Annas in Jerusalem to warn his brothers-in-law. But again, Abraham refuses, twice.

In this refusal Christ has Abraham promising Caiaphas the same torment in the fire for his entire household: Eleazar, Jonathan, Theophilus, Matthias, and Annas the Younger, and no doubt his father-in-law Annas the Elder also. No wonder, then, that this is the last of the series of parables in Luke chapters 14-16 either addressed to the Pharisees or with the Pharisees present. In the next verse (Luke 17:1) the Pharisees are gone, and Jesus is left alone with the disciples.

The only thing that is literal about the parable is the prophecy of Luke 16:31 that was fulfilled in John 12:10 when Caiaphas and his family tried to kill Lazarus rather than accept the fact that Jesus had raised him from the dead.

The Rich Man, Lazarus and Abraham (Part 3 of 4)

“At his gate was laid a beggar named Lazarus, covered with sores and longing to eat what fell from the rich man’s table. Even the dogs came and licked his sores.” (Luke 16:20-21).
Continue Reading
First Principles

The Rich Man, Lazarus and Abraham (Part 2 of 4)

The parables of the New Testament are not simple stories like the fairy tales that we tell children. They can be, and were intended to be, difficult to understand.
Continue Reading
First Principles

The Rich Man, Lazarus and Abraham (Part 1 of 4)