The Spectrum of the Saints

Hae you ever noticed a rainbow on a wall when light shines through a window? What causes that to happen? 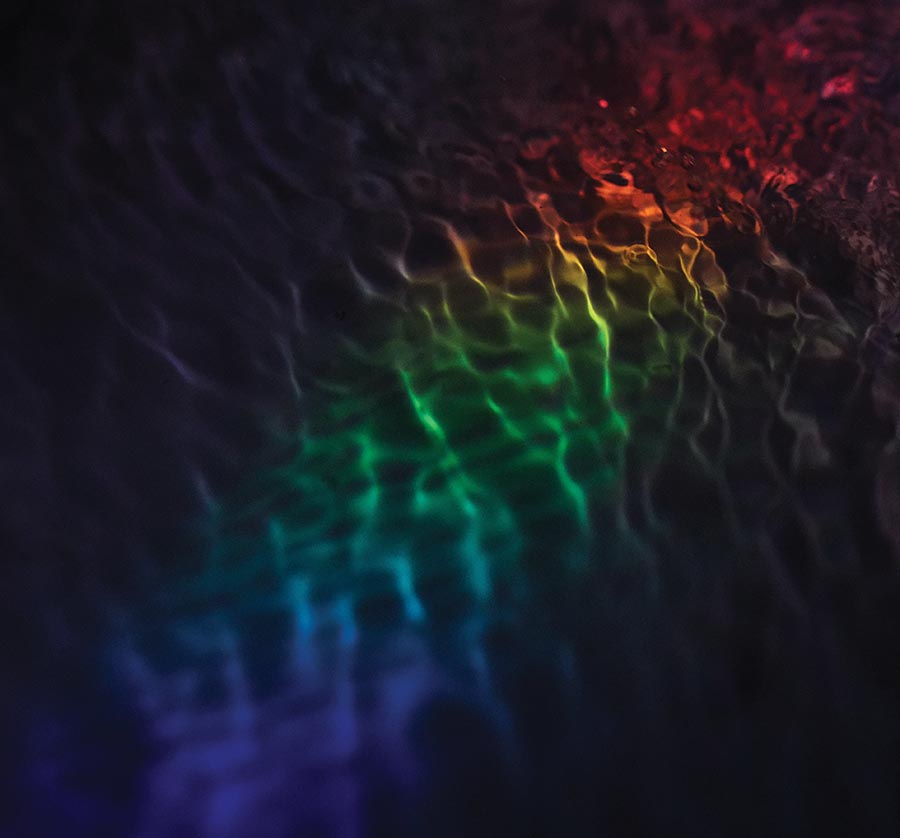 Light consists of microscopic particles called photons that travel at a constant speed—the speed of light, yet each carries different amounts of energy. The more energy a photon carries, the higher the frequency of its wavelength. In a vacuum, light travels at the same speed no matter its wavelength. But something fascinating happens when that light enters a different medium, such as a window. Light changes speed in the new material, which causes it to change direction and enter at a new angle. The more energetic photons slow down to a greater extent than less energetic ones, resulting in the separation of colors in the spectrum. Once the light gets separated, each color leaves the window at a different angle, and that’s when we see that rainbow on the wall.

After reading this scientific explanation, you may conclude that light passing through a medium creates colors. Yet, that’s not the case. In 1666, Sir Isaac Newton conducted an experiment where he passed red light from one prism through a second prism to determine if more colors branched from it. However, the color didn’t change. Prisms or other materials that refract (change the direction) of light don’t create new colors, but rather the separate colors are already present. To prove this, Newton used a lens and another prism to recompose the color spectrum back into white light successfully.

White light does not create all the colors; it already contains them. If you only keep one thought from everything you just read, hang on to that one.

Light isn’t just featured in the Bible; it’s an ever-present symbol of God’s character (1 John 1:5). To see light is to see God’s handiwork (Psa 20)—not only in the heavens but within ourselves. Reading that the law is but a “shadow of good things to come” (Heb 10:1 ESV) implies the presence of light shining backward through time—from the Kingdom to the wilderness wanderings but prevented from being seen due to the limitations of the flesh. After many years of men and women seeking for God’s light to shine upon them in full, the true Light was sent into the world in the person of the Lord Jesus Christ. John spoke of the Light’s appearing into the world:

The true light, which gives light to everyone, was coming into the world. He was in the world, and the world was made through him, yet the world did not know him. He came to his own, and his own people did not receive him. But to all who did receive him, who believed in his name, he gave the right to become children of God, who were born, not of blood nor of the will of the flesh nor of the will of man, but of God. (John 1:9-13 ESV).

The Lord himself explained it this way in John 8:12: Again Jesus spoke to them, saying,

“I am the light of the world. Whoever follows me will not walk in darkness, but will have the light of life.” (ESV)

Did you know you are a light in this world, too? If you received the Lord Jesus into your life and were baptized in his name, then you are lights shining in the world. The Apostle Paul encourages believers of this truth in Philippians:

Therefore, my beloved, as you have always obeyed, so now, not only as in my presence but much more in my absence, work out your own salvation with fear and trembling, for it is God who works in you, both to will and to work for his good pleasure. Do all things without grumbling or disputing, that you may be blameless and innocent, children of God without blemish in the midst of a crooked and twisted generation, among whom you shine as lights in the world, holding fast to the word of life, so that in the day of Christ I may be proud that I did not run in vain or labor in vain. (Phil 2:12-16 ESV).

When you read that, do you see yourself as a mirror reflecting an existing light? Or do you picture a lighthouse on the coast, guiding wayward ships to safety? Admittedly there’s a mixture of both in our discipleship, as we seek to emulate the Lord’s example. Yet, the Bible doesn’t lie. You have been called to shine as a light in the world. Yes, you, despite your youth and with your insecurities, shortcomings and fear of inadequacy. The Lord has called you—individually—to be a light among many to proclaim the good news of God’s Kingdom through your words and your behavior.

If you read stories of righteous people in Scripture, you’ll often read of them being a “type” of Christ. This simply means they foreshadowed his life and work somehow—whether through sacrifice, overcoming sin, or through leadership. You’ll probably notice, however, that no one person by themself in Scripture can fit the bill of fully foreshadowing Christ. It makes sense, considering how massive the scope of his redeeming work was and continues to be. The best and brightest examples in the Bible, aside from the Lord himself, only make up one facet of the fullness of the Lord’s character. It’s almost as if each of them is but one color on the visible light spectrum, which all combined can create white light.

The Lord has called you—individually—to be a light among many to proclaim the good news of God’s Kingdom through your words and your behavior.White light does not create all the colors; it already contains them. The body of Christ is not meant to be incomplete, but whole. Just as we wouldn’t picture Christ’s body as maimed, we should not envision the spectrum of the saints as existing without all the colors represented. For without all the colors present, you can’t reassemble them to get white light again. There are often expectations for young people in our community (usually unintentional, but not always) to conform to a certain lifestyle or accomplish predetermined goals to be perceived as a contributing member of the local and worldwide community of believers. How often have you felt pressed to be in a committed relationship while you’re still getting your life together? How often have you been asked if you’re planning to get married or when you’re going to have kids, only to hear the tone of disappointment when you explain how it’s not in the cards? How often do you hear about people going on mission trips and showing their zeal for the Lord, yet nobody congratulates you for preaching the gospel through concerted efforts to control your temper? Does one outshine the other? These are just a few examples of questions implying how one needs to conform, but I imagine you get the picture. The pressures which all members, but especially young people, face to measure up to someone else’s version of the “good Christadelphian” are overpowering. But to hear your best efforts to live the gospel are somehow inferior to someone else’s is like hearing that one color of the spectrum is somehow less valuable than another—even though both are equal components of white light.

As members of the Lord’s body, we need to be more mindful and respectful of those who strive to manifest God’s character differently than we do. Rather than coerce others to conform, we need to affirm their intrinsic worth to God for who they are—not what we want them to be. It’s only together, from all different walks of life, that we can better appreciate the different components of God’s character and strive to glorify Him until the return of His Son.

You are the light of the world. A city set on a hill cannot be hidden. Nor do people light a lamp and put it under a basket, but on a stand, and it gives light to all in the house. In the same way, let your light shine before others, so that they may see your good works and give glory to your Father who is in heaven. (Matt 5:14-16 ESV).