Many of us are familiar with archaic English only from reading the King James Version of the Bible, such as "thou" and "thee" instead of "you," and all the strange verb forms ending with "eth" or “est.” Where did such words come from? Why did they disappear? And is there any reason to perpetuate them today? 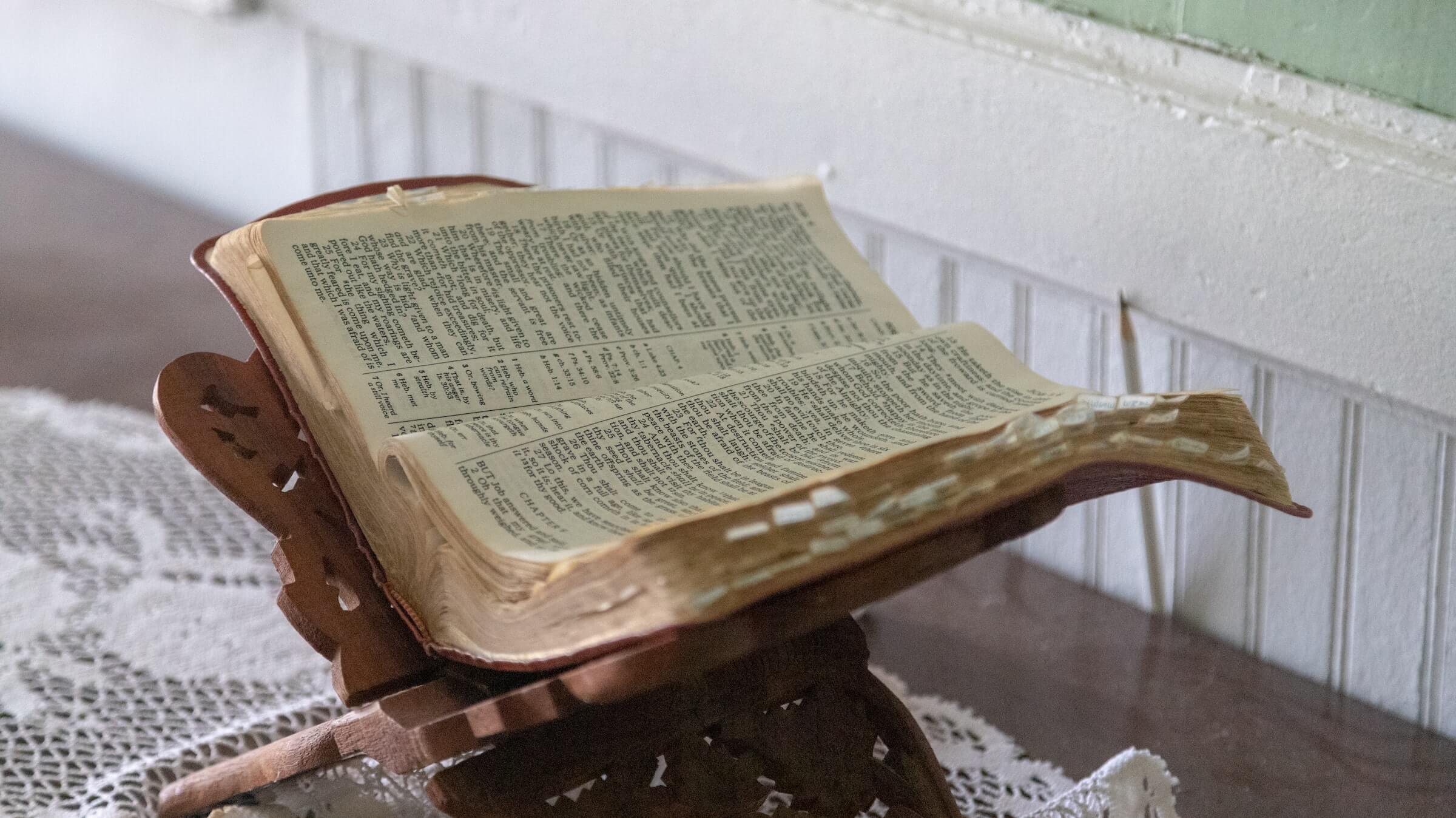 First of all, let’s look at the peculiar second-person pronouns: “thou,” “thee,” and “ye”… in addition to our still familiar “you.” Originally, in what might be called Early Modern English—let’s say the 1500s—these pronouns expressed clear distinctions based on a number, that is, singular or plural.

A recognition of this simple difference between “thou” and “ye,” and between “thee” and “you,” can shed unexpected light on various Bible passages. Just one example: in Luke 22:31-32, Jesus speaks to Peter:

Behold, Satan hath desired to have you, that he may sift you as wheat: but I have prayed for thee, that thy faith fail not: and when thou art converted, strengthen thy brethren.

Our understanding of this passage is helped considerably when we realize that “you” is plural, while “thou” and thee” are singular. Thus Jesus is really saying:

“Satan has desired to have all of you [the apostles], that he may sift you all as wheat: but, Peter, I have prayed for you especially, that your [individual] faith will not fail; and when you [individually] are converted, then strengthen all your other brothers.”

Nowadays, however, “you” has taken the place of all four of these forms—subject as well as object, singular as well as plural. To compensate for this confusing simplicity, English speakers have developed various substitutes so as to be more specific: for example:

In most of the southern United States, “you all” or its contraction “y’all” is used for the plurals;

In parts of the northern United States, and elsewhere, “you guys,” “you lot,” “youse guys,” and other less polite expressions do the same job.

At the beginning of the 17th century (the early 1600s), the translators of the King James Version preserved the old pronoun distinctions, and for the same old reasons (expressing differences of number and subject/object)—even as they were beginning to go out of style in the society around them.

In this, the KJV men were following English Biblical scholar and linguist William Tyndale (c. 1494-1536), who some 80 or 90 years earlier had sought to preserve the singular and plural distinctions found in Hebrew and Greek by consistently using “thou” for the singular and “ye” for the plural.

By doing so, he probably saved “thou” from extinction while at the same time giving it an air of solemnity. Tyndale’s usage remained familiar because of the KJV, long past the time when “thou” and “thee” might have disappeared from English altogether.

Ironically, many folks today see “Thee” and “Thou” as the appropriate way to address God, solely because the KJV does so, and on the assumption that such language is more formal and more solemn, when in fact it had always been ordinary everyday speech.

Verb forms for “thou”

In the archaic English of the 1600s, “thou” had a large set of verb forms that went with it. These verb forms were generally characterized by the endings “-st” or “-est,” such as:

Of course, since all these verb forms were linked with “thou,” they disappeared along with all the other archaic English—at least in everyday speech. Yet, as most of us know, they remained in the KJV and consequently in the prayers of those familiar with that version.

Now, reading the KJV is one thing and can be managed reasonably well with a bit of practice (although uninformed listeners may not understand what they hear). But praying extemporaneously while trying to match the verb forms (“art… hast… wast… wilt”) with the “Thou’s” addressed to our heavenly Father can produce unusual results—not necessarily helpful to the spirit of prayer. The apostle Paul wrote:

In the church I would rather speak five intelligible words to instruct others than ten thousand words in an unknown tongue. (1Cor 14:19, NIV).

And we might amend his statement by replacing “speak” with “pray.”

Everyone who has tried to pronounce the old verbs with “eth” endings knows how difficult it can be. The effort can leave us sounding like we all speak with a lisp. How did we get into this predicament?

The following is from The Cambridge History of English and American Literature in 18 Volumes (1907–21).

The story of English grammar is a story of simplification, of dispensing with grammatical forms… One of those is the [replacement], in the standard language, of verb forms like “cometh” by forms like “comes.”

For a time, the custom prevailed of writing “-eth” but pronouncing “-s.” In 1643, Richard Hodges [writes], “Howsoever we use to write thus, leadeth it, maketh it, noteth it, raketh it,” yet in our ordinary speech we say leads it, makes it, notes it, rakes it.” Gradually, “-s” predominated, but “-eth” did not disappear. It was heard in church, though, even there, “-s” was frequently sounded instead.

American–British journalist and author Bill Bryson (1951-), who has written extensively on the development of the English language, writes:

Spelling and pronunciation in English are very much like trains on parallel tracks, one sometimes racing ahead of the other before being caught up. An arresting example of this can be seen in the slow evolution of verb forms in the 16th and 17th centuries that turned “hath” into “has” and “doth” into “does.” Originally “-th” verbs were pronounced as spelled.

But for a generation or two during the period from (roughly) 1600 to 1650, they came to be pronounced as if spelled in a modern way, even when the spelling was unaltered. So, for example, when Oliver Cromwell saw “hath” or “chooseth”, he almost certainly read them as “has” and “chooses” despite their spellings. Only later did the spellings catch up.1

It is extraordinary, isn’t it? In countless churches and ecclesias around the world, readers and speakers are still struggling today to get the “eth” and “est” verb endings of the KJV pronounced correctly, while still seeking to understand and convey the sense of the passage.

Such laborious effort can become a sideshow, distracting us from the real message of the Bible. Also, it can suggest to listeners that the living and vibrant Word of God is muffled under layers of cotton packing or Styrofoam—unable to speak clearly and forcefully to the men and women of today.

And so we observe a second irony as we consider these archaic verb endings. Remarkably, hundreds of years ago, such difficulties of reading and speech were actually being ignored by the first few generations of King James Version readers—and replaced, very often, by our own modern and far easier verb endings.

What might such early Bible readers think of us—laboring like Sisyphus to push this huge boulder of strange language up the mountain, again and again, all for the sake of tradition—when it would be so easy to have the same message from the Lord God written and spoken, smoothly and efficiently in our modern language?

Today, there are many Bible versions that convey the same gospel message as the KJV but do so in simple, easy-to-read language:

For the purists, there is even the New King James Version (NKJV), which builds upon the translation foundation of the earlier KJV, yet is updated for contemporary readers without sacrificing the majesty and authority of the original. And the best news of all. Those pesky, archaic words which are so difficult to pronounce have disappeared to be replaced by modern language.

Perhaps the best one can do is to close with the words of Paul once more:

In the church I would rather speak five intelligible words to instruct others than ten thousand words in an unknown tongue.  (1 Cor 14:19 NIV).

Presiding is perhaps the most important duty on Sunday morning—even more important to the memorial meeting, as a whole, than exhorting.
Continue Reading
Reflections

First, you'll have to understand what it was like when my mother was growing up in the depths of the Great Depression.
Continue Reading
Reflections

A City of Refuge

God's law offered protection to anyone who had harmed another and feared that an aggrieved family member (an avenger of blood) might take revenge for his loss.
Continue Reading
Reflections

Sister Karen Hutchinson, of Austin, age 63, died on May 11. I know that she would be embarrassed to hear what I am about to say, but since she can’t hear it, I feel free to speak.
Continue Reading
Reflections

The fifth stanza of The Battle Hymn of the Republic, which is not always sung, contains these words: "In the beauty of the lilies Christ was born across the sea, With a glory in his bosom that transfigures you and me." These words of Julia Howe may have been inspired by the first few verses of Hebrews 1. How can the “glory” in Christ’s bosom transfigure us?
Continue Reading
Editorial
"My Version of the Facts"
Continue Reading
Reflections