Where did Bible Marking come from?

In the earliest days, when Bible manuscripts (or individual Bible books or letters) were copied for circulation, the copyists took every possible precaution to avoid errors. They knew that an error, once left in a manuscript, would be copied and recopied time after time, thus multiplying the first mistake. 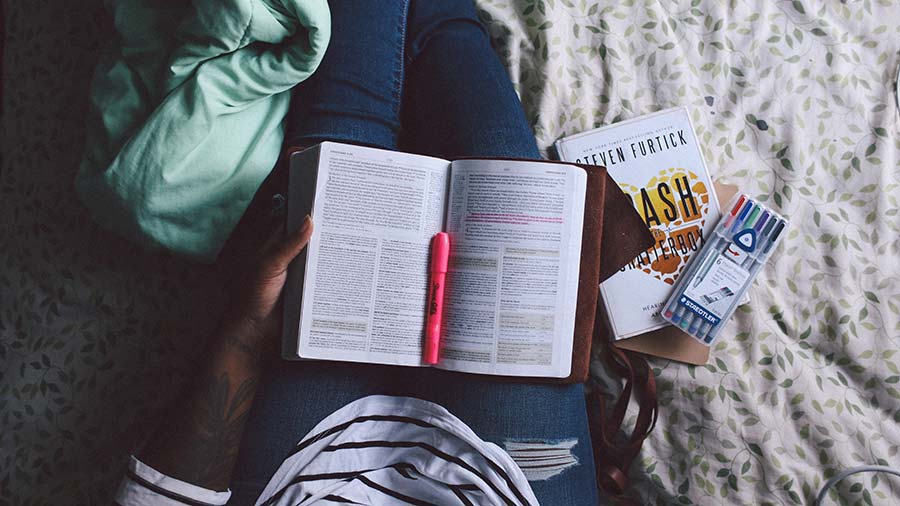 Similarly, Bible students who worked with handwritten manuscripts generally avoided making any notes in the margins—again, for fear the next copyist to work from that manuscript might mistake the note for part of the text, and so perpetuate the problem.

This attitude began to change when the 15th-century printing press made full Bible texts or translations available to many people. Then the owner of the Bible could make notes to his or her heart’s content, with no fear that the notes would be mistaken for part of the text. Even then, though, a lot of folks did not mark up their Bibles, possibly because of the Bible’s own warnings:

“See that you do all I command you; do not add to it or take away from it.” (Deut 12:32 NIV).
“Do not add to [God’s] words, or he will rebuke you and prove you a liar.” (Prov 30:6 NIV).
“I warn everyone who hears the words of the prophecy of this book: If anyone adds anything to them, God will add to him the plagues described in this book. And if anyone takes words away from this book of prophecy, God will take away from him his share in the tree of life and in the holy city, which are described in this book.” (Rev 22:18,19).

Nevertheless, many of us today write notes in the margins of our Bibles. Sometimes we buy wide-margin Bibles for that specific purpose. We may even have graduated from wide-margin Bibles (with room for lots of notes) to Bible translations on computers (with practically unlimited space available to add our own commentaries and study helps). Surely there can be nothing wrong with this approach to Bible study, if we don’t mistake marginal notes for the Bible itself, or think of our notes, from whomsoever, as inspired or infallible.

When I began to study the Bible, I used Bro. Maurice Stewart’s first-principle notes. I copied these diligently, word for word, into my wide-margin Bible (which I still have, by the way). At the same time, I also used Bro. H.P. Mansfield’s verse-by-verse commentaries on various books of the Bible.

Many of those early notes are still there in my laptop computer, copied from ordinary Bible paper into the elusive magic of computer text. But alongside these notes, there are many, many more computer notes which I have produced on my own, following the suggestions of Bro. Harry Whittaker, who wrote two wonderful books, Exploring the Bible and Enjoying the Bible. (He wrote many wonderful books but these two are the ones I have in mind.) From these two books I learned techniques for Bible study which I could do on my own. And I learned that the best Bible commentary is the one we construct for ourselves, for this simple reason: By the time my own thoughts have been processed and put onto paper and/or into my computer, I will have learned why they are there, why they make sense, and how they relate to other parts of the Bible. Brother Whittaker’s best single piece of advice for Bible study comes from one of his first books, Exploring the Bible: “Don’t rely on memory; when you hear or learn something worthwhile, write it down immediately!”

So far as I can tell, the first Christadelphian to mark his Bible was Robert Roberts (1839-1898). He explained why in his autobiography, My Days and My Ways:

“It was about [the early 1850s] when I commenced the systematic reading of the Scriptures, now so general a practice, with the aid of The Bible Companion. I found I must read, first for information, and then for daily sustenance in the things of the Spirit. Reading led to marking special passages with ink—arising from the need for ready quotations in conversation with those who opposed the truth. I think I got the first idea of [Bible] marking from Mrs. Stowe’s Uncle Tom’s Cabin.”

The Mrs. Stowe to which Robert Roberts refers is Harriet Beecher Stowe (1811-1896), an American abolitionist and author. Along with her husband, a minister and professor, she supported the Underground Railroad, bringing escaped slaves out of the South into safety and security in Canada. She is best known for her novel, which depicted the harsh conditions of African slaves in America. Her book was read by millions, in the United States but also in Great Britain and other countries, and was influential in provoking anti-slavery sentiment. It is said that when she met President Lincoln in 1862, he greeted her with: “So you are the little lady who wrote the book that started the great war [Civil War].”

In her novel, Stowe wrote of Uncle Tom, a slave who taught himself to read the Bible, and then preached its message, as best he could, to his fellow-slaves every Sunday. But such reading, for someone who was scarcely literate at the time, was very time-consuming, and Uncle Tom needed a better method of finding specific passages in his Bible. So, as Harriet Beecher Stowe explained:

“As for Tom’s Bible, though it had no annotations and helps in the margin… still it had been embellished with certain waymarks and guideboards of Tom’s own invention… It had been his custom to get the Bible read to him by his master’s children, in particular by young Master George; and, as they read, he would designate, by bold, strong marks and dashes, with pen and ink, the passages which more particularly gratified his ear or affected his heart. His Bible was thus marked through, from one end to the other, with a variety of styles and designations; so he could in a moment seize upon his favorite passages, without the labor of spelling out what lay between them.” (Uncle Tom’s Cabin, Ch. 14).

Stowe’s model for Uncle Tom was Josiah Henson (1789-1883). He was born into slavery in Maryland, and eventually escaped to Ontario, Canada, where in the 1830s he founded a settlement for fugitive slaves. From there, he returned to the United States several times, helping other slaves escape to Canada. He was often referred to as a modern-day Moses.

Henson also wrote his own colorful biography, The Life of Josiah Henson: Formerly a Slave, Now an Inhabitant of Canada. In later years, Henson and his wife sailed to Great Britain, where they visited Queen Victoria at Windsor Castle. Mrs. Stowe had sent the Queen a copy of Uncle Tom’s Cabin, and the Queen was very pleased to finally meet the man who had inspired such an extraordinary fictional character.

So where did we get the idea for Bible marking? Well, that’s an easy question to answer: