Who Can Bind the Strong Man?

The mighty Samson could not bind sin, so sin ruled in his house. But Jesus was always the Lord of his house... Jesus would not be under its dominion. 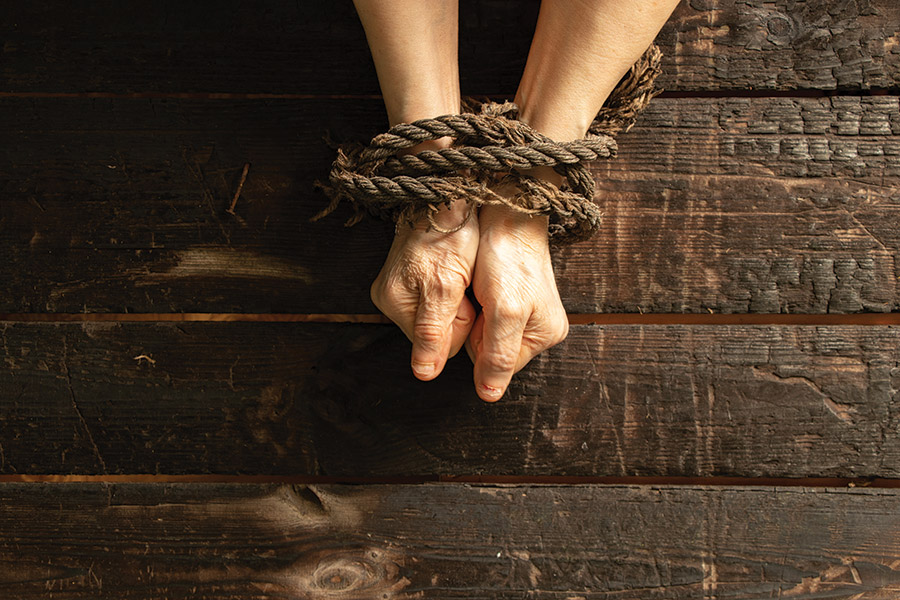 It started out with an accusation from his own family: “He is out of his mind.” The scribes, surprised at hearing this from Jesus’ relatives seized on this thought and then slandered him.

“He hath Beelzebub, and by the prince of the devils casteth he out devils.” (Mark 3:22).

Jesus then rebukes them for their faulty logic and shows that Satan could not cast out Satan. He then illustrates this showing a house divided against itself is doomed to fail. But then, an unusual parable,

“No man can enter into a strong man’s house, and spoil his goods, except he will first bind the strong man; and then he will spoil his house.” (Mark 3:27).

How would his disciples understand this parable? What do you think it means? Samson was the only strong man in scripture who was bound, enabling the enemies of Israel to plunder the house of Israel. In light of this parable, we can clearly see the goal of the Philistines was to “bind the strong man” of Israel.

“But the Philistines took him, and put out his eyes, and brought him down to Gaza, and bound him with fetters of brass.” (Judg 16:21).

What is even sadder is that earlier, Samson’s own countrymen from Judah, thought it expedient to bind Samson.

“We are come down to bind thee, that we may deliver thee into the hand of the Philistines.” (Judg 15:12).

Samson was God’s Deliverer. The angel proclaimed that he would begin to save them from their arch enemy, the Philistines, yet the men of Judah worked alongside the Philistines to bind Samson and deliver him for death. The Hebrews displayed an astounding lack of faith. They saw the miracles and signs of Samson but wouldn’t follow him.

In the end, Samson stood alone. The Hebrews had chosen to remain in bondage to the Philistines, instead of becoming free men. With Samson bound, they could spoil and rule over the house of Israel.

Perhaps what we miss at the beginning of our story was that Jesus’ own family wanted to bind him too! The words “lay hold” mean to restrain, “seize by force” (Weymouth), “lay hold on him” (YLT). Like Samson’s brethren, Jesus’ brethren wanted to have power over him, and bind him up.

Like the Philistines, Jesus’ religious contemporaries eventually succeeded and caused him to be bound and delivered to his enemies.

“All the chief priests and elders of the people took counsel against Jesus to put him to death: And when they had bound him, they led him away.” (Matt 27:1-2).

In the end, Jesus stood alone.

We can easily understand that Samson was a strong man. What we fail to appreciate sometimes is that Jesus was the strong man!

“Let thy hand be upon the man of thy right hand, upon the son of man whom thou madest strong for thyself.” (Psa 80:17).

Consider these similarities: both Jesus and Samson had their births announced by angels, both were to be deliverers, both performed signs and miracles. We see many parallels between Samson and Jesus. But in the end, Samson ended up being a slave in his enemy’s house. He would die with them.

The slander of the scribes painted the same picture. Their hateful slander against the Son of the Living God was that Jesus couldn’t save because he was the slave to a Philistine god, Beelzebub. But we still haven’t solved this parable.

But let’s step back for a minute. The Greek word Beelzebub means: “Lord of the House”. When you think of this slander directed at Jesus, you realize that sin was never “The Lord, the possessor of the house” of Jesus, his body. Until Jesus lived, sin successfully resisted every attempt made against it.

Paul picks up on this in Hebrews and Romans.

That through death he might destroy him that had the power of death, that is, the devil; And deliver them who through fear of death were all their lifetime subject to bondage. (Heb 2:14-15).
Know ye not, that to whom ye yield yourselves servants to obey, his servants ye are to whom ye obey; whether of sin unto death, or of obedience unto righteousness? (Rom 6:16).

We can see how this simple parable starts to illuminate a greater truth to us. Sin is the master that has ruled mankind. It is the strong man demanding submission, obedience from us. But the parable goes on. There are two metaphors used in this parable.

This is where Samson, and the rest of us have failed. For us to successfully possess our vessel means that everything that was previously in it, (i.e., sin), be displaced, pushed out, swept clean and filled with righteousness. Jesus did what we fail to do. He took possession of his body, took it captive, spoiled it. This brings us to our second metaphor.

Behold, a woman that had a spirit of infirmity eighteen years; and she was bowed together, and could in no wise lift herself up. And when Jesus saw her, he called her, and said to her, Woman, thou art loosed from thine infirmity. (Luke 13:11- 12).

Now consider verse 16 in the context of this parable:

And ought not this woman, being a daughter of Abraham, whom Satan had bound, lo, these eighteen years, to have been loosed from this bond on the day of the sabbath? Jesus can unbind, unloose those bound from sin.

Perhaps the very next day, Jesus would illustrate this parable. Jesus crossed the Galilee with the sole intention of healing one-man—Legion.

There met him… a certain man, which had devils long time, neither abode in any house, but in the tombs. (Luke 8:27).
He was kept bound with chains and in fetters; and he brake the bands, and was driven of the devil into the wilderness. (Luke 8:29).
Legion was a strong man, who could not be bound. He made his home in the tombs. Who could conquer such a formidable enemy? Jesus overpowered Legion, the strong man. We next see him submissive, sitting at the feet of Jesus and “in his right mind.” (v 35)

The Greek for “right mind” means to “exercise self-control,” “to curb one’s passions.” When you think of our Lord, the real battle was inside himself. Jesus defeated the strong man of sin within him by condemning it, never giving in to it. He strangled evil thoughts and bound them tightly.

“For though we walk in the flesh, we do not war according to the flesh… casting down imaginations, and every high thing that is exalted against the knowledge of God, and bringing every thought into captivity to the obedience of Christ.” (2 Cor 10: 3,5 ASV).

But the only way sin could be truly defeated, was to put his body to death. When Jesus was raised, clothed in immortality, he had taken his captivity captive. It was conquered and destroyed. Jesus entered the arena of sin, this was in his own body, and there he defeated it! 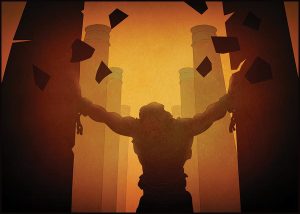 This brings us back to Samson. Samson was in the arena, in the house of a Philistine God, possibly Beelzebub. He too stretched out his arms, and he destroyed that house of sin. He brought down that evil building and he also destroyed his own body of flesh.

Thou hast ascended on high, Thou hast led captivity captive; Thou hast received gifts for men, yea, for the rebellious also, that the LORD God might dwell among them. Blessed be the Lord, who daily loadeth us with benefits, even the God of our salvation. He that is our God is the God of salvation; and unto GOD the Lord belongeth the discharge from death. (Psa 68:18-20 KJ21).

Our strong man Jesus tells us this: “Him who overcomes.” Perhaps a better translation is to

In Matthew’s account where Jesus is called Beelzebub, Matthew adds one more detail.

This challenge from Jesus is directed to us. Which strong man will you serve? Will you battle the strong man of sin who is trying to occupy your body, or do you resist? If we choose wisely like Legion, this blessing will fall on us too. But Jesus said unto him,

“Go home to thy friends, and tell them what great things the Lord hath done for thee, and how He hath had compassion on thee.” (Mark 5:19).

What might be going on here other than putting down women? What, in the larger scheme…
Continue Reading
Reflections

Twice that I know of, maybe three times, Jesus used a mustard seed as a…
Continue Reading
Reflections

What Are We To Do?

Fear not, as our God will in His time right the wrongs and fix what’s…
Continue Reading

Who was the Pharaoh of Exodus?