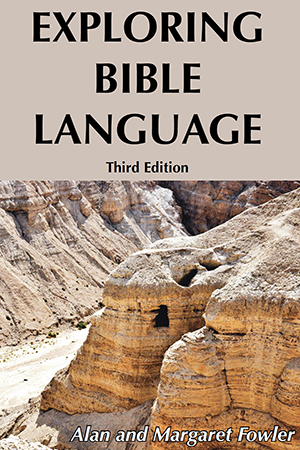 Exploring something always offers a challenge. The Bible is still the world’s best-selling book and our use of language is what separates humans from the rest of the animal kingdom. So, this book offers us a wonderful opportunity to accept the challenge!

I met the authors, Bro. Alan and Sis. Margaret Fowler, during their visit to Guyana at the 1986 Bible School. Indeed, Bro. Alan Fowler was an exemplary Bible student, and his wife, Sis. Margaret, is the daughter of Bro. Will Watkins, who did pioneer missionary work in Guyana in the 1950s.

As I read the book, I became absorbed in the amazing insights. Each section rose to a depth never before explained. So prospective readers, the excitement of discovery will be your joyful fascination from the introduction through the four sections of the book.

Here’s a few of the interesting treasures that you will find in the book. In section 1, dealing with the use of “words”, Bro. and Sis. Fowler explained the difficulty of translation, especially when words can have more than one meaning. Some of the translation issues are associated with changes in meaning over the centuries. Words like “conversation” for conduct or “prevent” for precede. Greek language featured a rich vocabulary and different words to convey various shades of a meaning. Hebrew was comparably small in vocabulary, with many unspecialized words that have more than one meaning. The book then takes us on a journey through multiple examples of such words and how they have largely been misunderstood.

We are then introduced to “figures of speech.” While I was familiar with simile, metaphor and hyperbole, I learned of several more. The authors describe almost ten figures of speech, aligning each one with appropriate Bible references. Particularly helpful is the treatment of God in, human terms.  This is known as the figure of anthropomorphism.

Part 3 brings us to style and structure, with an analysis of the use of prose, poetry and drama. We are provided with examples of how each is used to unravel the possible truth in certain controversial Bible stories.  Examples of drama include such stories as Job and Song of Solomon. Three theories are also presented for the literal of days of Creation, each one supported by relevant Scriptures. Their motto for interpretation is to let Scripture explain Scripture.

Verb forms is the final section. I was particularly struck by the novel interpretation of the fatal spear thrust which may have precipitated the early death of Jesus on the Cross. The record says “one of the soldiers pierced his side.” The Greek however, should actually read “had pierced.”

The real meaning of words and understanding the context by referencing the original Hebrew or Greek represents an invaluable contribution by the two scholars who wrote this book. It is important that we have a clear, unbiased understanding of words, how they are being used and their context. This book provides great tools for continuing study.

I have the greatest pleasure in strongly recommending Exploring Bible Language.