Long musical compositions are often separated into short movements to facilitate performance and comprehension; these often contrast in tone to convey mood such as tension in discord vs. peace in harmony. 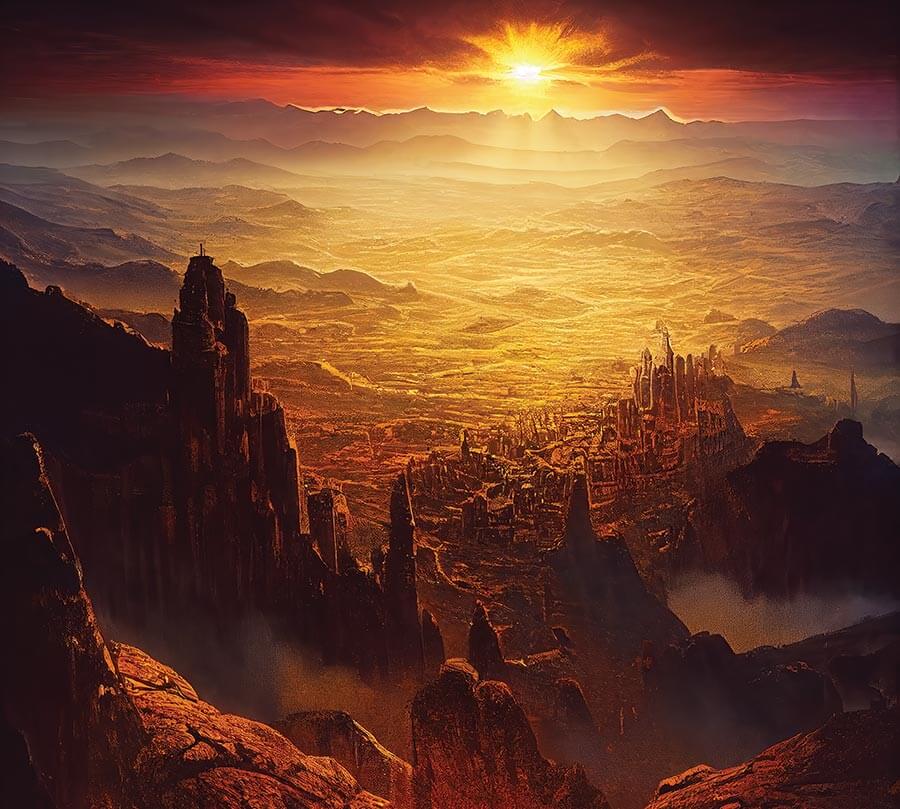 The Psalms of Ascents can likewise be divided into five parts to assist their contemplation. Themes and accompanying tones for such “movements” are proposed.

In our previous article, we ascended from the discord of Meshech to the harmony of Mt. Zion (Psa 120-122). The clear happy allegory is our individual ascent from sin’s bondage, Meshech, to our freedom in Christ, Jerusalem.

Psalms 123-125 remind us that our journey to Mt. Zion was not and will not be without its adversaries. These psalms, most importantly, remind us of God’s faithfulness to deliver us from them all!

We look with complete dependence to the LORD (Yahweh) our God for our salvation, salvation based on His grace. As a servant would look to his master, we cry, “Be gracious to us. O LORD, be gracious to us.”1 In turn, we are delivered, this time from the trial of scoffing and the proud.

Sadly, scoffing and mocking are corruptions of speech men use to dishearten one another. We have all experienced its weight and regrettably participated in its excess. The returned exiles of Babylon under Nehemiah experienced the trial of scoffing when rebuilding Jerusalem’s walls.

Now Tobiah the Ammonite was near him and he said, “Even what they are building–if a fox should jump on it, he would break their stone wall down!” (Neh 4:3).

So the wall was completed on the twenty-fifth of the month Elul, in fifty-two days! When all our enemies heard of it, and all the nations surrounding us saw it, they lost their confidence; for they recognized that this work had been accomplished with the help of our God. (Neh 6:15-16).

The way to endure the trial of scoffing is to keep one’s heart focused on the pending righteous judgment of God. Our Lord Jesus persevered through much scoffing and contempt (Matt 27:39-44). He did this by trusting in the LORD’s righteous judgment and promised resurrection deliverance. We are specifically told that such trust in God’s judgments is our example.

Christ also suffered for you, leaving you an example for you to follow in His steps, who committed no sin, nor was any deceit found in His mouth; and while being reviled, He did not revile in return; while suffering, He uttered no threats, but kept entrusting Himself to Him who judges righteously. (I Pet 2:21-23).

This is one of the psalms we know David wrote. Like most of the Psalms of Ascents, it is composed of two stanzas. The first describes the attempt of angry men to swallow up Israel. The second sings of God’s freeing deliverance as a bird from the trapper’s snare!

While David himself did experience attempts by angry men to swallow him up (Saul and Absalom come to mind), the wording and tone of this psalm seem to indicate a broader application. This is a psalm for all Israel to sing and thus would seem to concern Israel’s deliverance from past and future oppressors.

When did angry men seek to swallow up Israel? Actually, this has been a continual reality (to this day!) but the two historical events that came closest to accomplishing this desire were the Babylonian and Roman dispersions. These afflicting nations, while being the rod of God’s anger (Isa 11:5), were too harsh in their fury; they would have swallowed up completely and left no one alive! The LORD specifically calls the nations out on this when setting Israel free from Babylon;

Thus says the LORD of hosts, “I am exceedingly jealous for Jerusalem and Zion. But I am very angry with the nations who are at ease; for while I was only a little angry, they furthered the disaster.” Therefore thus says the LORD, “I will return to Jerusalem with compassion; My house will be built in it!” (Zech 1:14-16).

The last enemy to be destroyed is death. Like the wrath of angry men, it is never satisfied (Prov 30:16) and would swallow up all men completely. But our Heavenly Father did not make it so, He established Christ to break death’s bond and set us free!

The last enemy to be destroyed is death.

This deliverance was accomplished first in Christ’s strengthening to endure the cross, then in finality in resurrection glory. Set free as a bird from the trappers’ snare, Christ lives to likewise set us free eternally!

Father, if You are willing, remove this cup from Me; yet not My will, but Yours be done.” Now an angel from heaven appeared to Him, strengthening Him. (Luke 22:42-43).

But now is Christ risen from the dead, and become the firstfruits of them that slept. For since by man came death, by man came also the resurrection of the dead. For as in Adam all die, even so in Christ shall all be made alive. But every man in his own order: Christ the firstfruits; afterward they that are Christ’s at his coming. (I Cor 15:20-23).

This psalm was composed to provide strong encouragement. God’s promises are immovable and eternal. As Mt. Zion cannot be moved, neither will those who trust in the LORD. In verse 2, God’s protection is described as enduring forevermore. In Hebrew this is “v’ad-olam,” a combination of two words both meaning eternity for emphasis!

Yes, we will feel the scepter of wickedness, but it will not endure; its weight will not force the righteous to turn aside to wickedness. God will deliver, and the promise of eternal peace for Israel is unshakeable.

A Song of Ascents

Those who trust in the LORD are like Mount Zion, which cannot be moved, but abides forever. As the mountains surround Jerusalem, so the LORD surrounds his people, from this time forth and forevermore. For the scepter of wickedness shall not rest on the land allotted to the righteous, lest the righteous stretch out their hands to do wrong. Do good, O LORD, to those who are good, and to those who are upright in their hearts! But those who turn aside to their crooked ways the LORD will lead away with evildoers! Peace be upon Israel!

To get from point A to point B, we must keep our eyes on our destination; in this case, the eternal promises of the LORD. Remember Lot’s wife! On all journeys there are trials and temptations; if we take our eyes off the goal we will invariably turn aside to crooked ways.

On Israel’s initial ascent to the promised land, Balaam and Moab intentionally tempted them with the wrongdoing of immorality (Rev 2:14) before they were about to cross the Jordan River into the promised land. This way of distracting sojourners is all too common to the present day. In Israel’s case, many fell. But God relented of the plague upon Phinehas’s persistence in uprightness of heart for the nation (Num 25:11).

The prophet Daniel’s friends Shadrach, Meshach and Abednego, while exiled, were challenged with a different type of wrongdoing–in this case, the worshiping of an idol to save their lives. Nebuchadnezzar’s scepter of wickedness was indeed very heavy, but try as he did by making the fire seven times hot, he could not force the righteous to stretch out their hands to do wrong!

O Nebuchadnezzar, we do not need to give you an answer concerning this matter. If it be so, our God whom we serve is able to deliver us from the furnace of blazing fire; and He will deliver us out of your hand, O king. But even if He does not, let it be known to you, O king, that we are not going to serve your gods or worship the golden image that you have set up. (Dan 3:16-18).

Sin in all its forms will tempt us on our journey. God has promised to surround us with His faithfulness as He surrounds Mt. Zion so that we can persevere.

No temptation has overtaken you but such as is common to man; and God is faithful, who will not allow you to be tempted beyond what you are able, but with the temptation will provide the way of escape also, so that you will be able to endure it. (I Cor 10:13).

Sin in all its forms will tempt us on our journey.

Most necessarily, God also provides His grace, so that we can get back up when we fall.

Wretched man that I am! Who will deliver me from this body of death? Thanks be to God through Jesus Christ our Lord! So then, I myself serve the law of God with my mind, but with my flesh I serve the law of sin. (Rom 7:24-25 ESV).

Christian walk carefully; danger is near;

On in thy journey with trembling and fear!

Snares from without and temptations within

Seek to entice thee once more into sin.

If thou forget on thy savior to call

Safe shalt thou walk through each trial and care

If thou art clad in the armor of prayer.

1 All Scriptural citations are taken from the New American Standard Version.