Jewish tradition attributes the Book of Job to Moses, making it the oldest book in the Bible. Yet it offers no hint of the Red Sea crossing, the giving of the Law, or the Israelites’ wilderness wanderings. This suggests Job’s trials and their dramatic retelling took place before Moses led the Israelites out of Egypt. 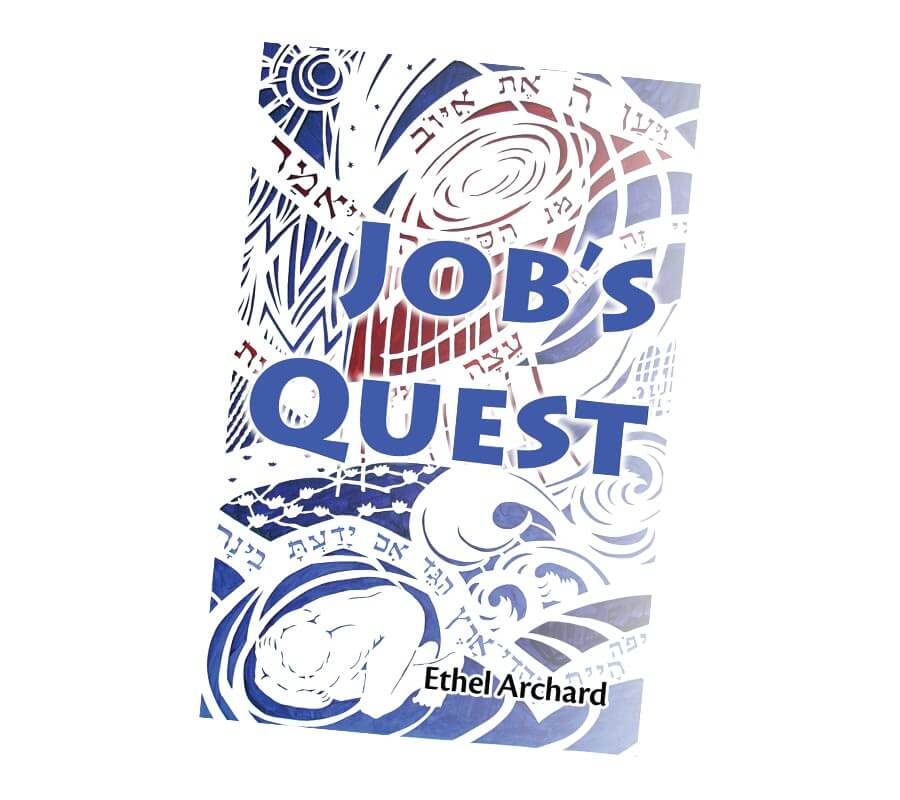 Job is usually identified with Jobab in the Genesis and Chronicles genealogies. (Gen 36:33-34 and I Chron 1: 23, 44-45). The great-grandson of Esau, he is called a prince of Edom and one of the greatest men of the east. He lived in the land of Uz (Job 1:1), likely in the north-western part of what is now Saudi Arabia, along the shores of the Gulf of Aqaba and often identified as the kingdom of Edom.

Moses was born, raised, and educated in Egypt. Nursed by his own mother, he was well aware of the God of Abraham. Brought up by Pharaoh’s daughter as a member of the nobility, he was literate and familiar with all things Egyptian. He fled to Midian at the age of forty.

During his sojourn in Midian, Moses married Zipporah, the daughter of Jethro, a Midianite priest called Reuel in Esau’s genealogies. Moses’ in-laws were Kenites (Judg 1:16 and 4:11). He must have heard (perhaps quite often) about his wife’s longsuffering ancestor Job.

The Book of Job contains subtle hints of Egyptian background. The allusions are clear enough that in a work of Jewish fiction from around the time of Christ, Job is a king of Egypt.1

I first became aware of the Egyptian background to Job when I read that the Egyptian hieroglyph for the dawn is the eye of the crocodile (Leviathan) rising just above the water level.2 Twice in Job, the eyes of Leviathan are compared to the eyelids of the dawn or the morning. (Job 3:8-9 and 41:18).

Another Nile denizen appears along with Leviathan at the end of God’s speeches from the whirlwind: Behemoth, or the hippopotamus. In fact, these two beasts lived along the Nile in Moses’ day, often in an uneasy relationship.

Nile hippos became extinct but would have been around in the time of Moses. Today, crocodiles only live south of the Aswan Dam. Both could be fierce and aggressive, and they sometimes fought each other. A hippo killed the first pharaoh, Menes; crocs were known for attacking people.

Moses would be familiar with these two impressive creatures, as would many of his fellow Israelites.3 So might Job, at least second-hand, because Uz was on an ancient trade route between Midian and Egypt.

Where is Wisdom Found?

Significantly, Job is the first of the Wisdom books. Its message revolves around the inadequacy of human wisdom in contrast to the wisdom of God, epitomized in the hymn to wisdom (Job 28).

The hymn’s first section (Job 28:1-11) portrays the impressive ingenuity involved in discovering and digging for precious metals and gemstones, as well as controlling the flow of waters. It describes the risks people take in descending deep into mine shafts, sometimes hanging in midair, to extract treasures from the rocks. This is the only Biblical description of ancient mining techniques.

Bronze Age people like Job and Moses would certainly be familiar with mining. The Kenites—(Judg 1:16 and 4:11)—were known for their skills as coppersmiths and metalworkers. While this may seem like a piece of trivia, it is a significant contextual clue.

The mention of copper smelting reflects the fact that Midian was well-known for copper mines from a very early time. The Trans-Sinai Highway, called the King’s Highway (Num 20:17), was an important trade route in the ancient Near East, enabling Egypt to import copper directly from Midian and could be the route Moses took when he fled from Egypt to Midian.

Horus, one of Egypt’s oldest and most revered gods, had the head of a falcon. The Eye of Horus was a hieroglyphic symbol for protection. This passing reference seems to be more than a mere coincidence:

True wisdom cannot be found by mining the depths of the earth. Not even the most revered bird of prey, with its acute vision, looking down from the sky, can see the whole picture.

Its second section (Job 28:13-19) makes the point that heavenly wisdom is priceless when compared with treasures that come out of the earth. The rich and powerful of ancient Egypt, as Moses would know, adorned themselves in both life and death with gold, lapis lazuli5, and other precious stones. The stunning artifacts found in the tomb of King Tutankhamun (a relatively minor pharaoh) are only the tip of the iceberg!

From a human perspective, diamonds are forever.6 In contrast, in God’s wisdom, only the things that are unseen are eternal (2 Cor 4:18). The Egyptians, in all their opulence, could never achieve eternal glory.

In its final section (Job 28:20-28), the hymn identifies where to find true wisdom. One must look upwards to God—not downwards to the earth.

From where, then, does wisdom come? And where is the place of understanding?
Behold, the fear of the Lord, that is wisdom, and to turn away from evil is understanding. (Job 28:20, 28).

In His revelation from the whirlwind, Yahweh focuses on certain animals. The original language was challenging to translate into English, but there are at least a few veiled references to the Egyptians’ sham gods and goddesses.

Their god of writing and wisdom was Thoth, often portrayed with the head of an ibis (see illustrations on next page). The ibis is a long-legged wading bird that still thrives along the Nile; it stood for science, mathematics, and wisdom. The engineering feats and complex artistry of the ancient Egyptians continue to amaze and intrigue scholars even today. Moses grew up amid these impressive human achievements.

Yahweh is the source of wisdom.

Hidden in God’s speech from the whirlwind is a key question (Job 38:36 NIV, also see ESV note): “Who gives the ibis wisdom?” Translators have obviously struggled with the language here, but this interpretation fits the context: Yahweh, not some bird-headed idol, is the source of wisdom.

Ma’at was their goddess of truth, justice, and order in the universe—key themes of the book of Job. Her image appears in numerous tombs, often wearing an ostrich feather. According to Egyptian mythology, the heart of a deceased dignitary would be weighed on a scale against Ma’at’s ostrich feather (representing truth) to judge worthiness for the supposed afterlife.

The wings of the ostrich wave proudly, But are they the pinions and plumage of love?… God has made her forget wisdom and given her no share in understanding. (Job 39:13, 17 ESV).

Yahweh’s description of the ostrich seems like a parody: her wings look nice, but underneath all her beauty, she’s not very smart. Similarly, Egyptian ideas about truth and justice might look good, but they offer no real understanding.

In part, Yahweh’s message was an attack on Egyptian religion. Later, through the ten plagues, He would attack and defeat the Egyptian gods, demonstrating to the Israelites the power and reality of the one true God of Abraham.

The Egyptian imagery, while obscure to the modern reader, attests to a Mosaic origin for the Book of Job. Moses had to see the emptiness of Egyptian culture and put it behind him. His time in Midian enabled him to break away from the vanities of Egypt.

Moses probably went through a process similar to Job. Job started with a simplistic view of his God (the God of Abraham) based on tradition, then came to appreciate His mercy and majesty. Moses arrived in Midian with a strong but simple faith, and there he began to understand his God more deeply.

Relief from the tomb of a princess at Sakkara
The crocodile is about to snatch away the hippo’s calf. This not only shows both animals lived in proximity but also that they had an uncomfortable relationship. 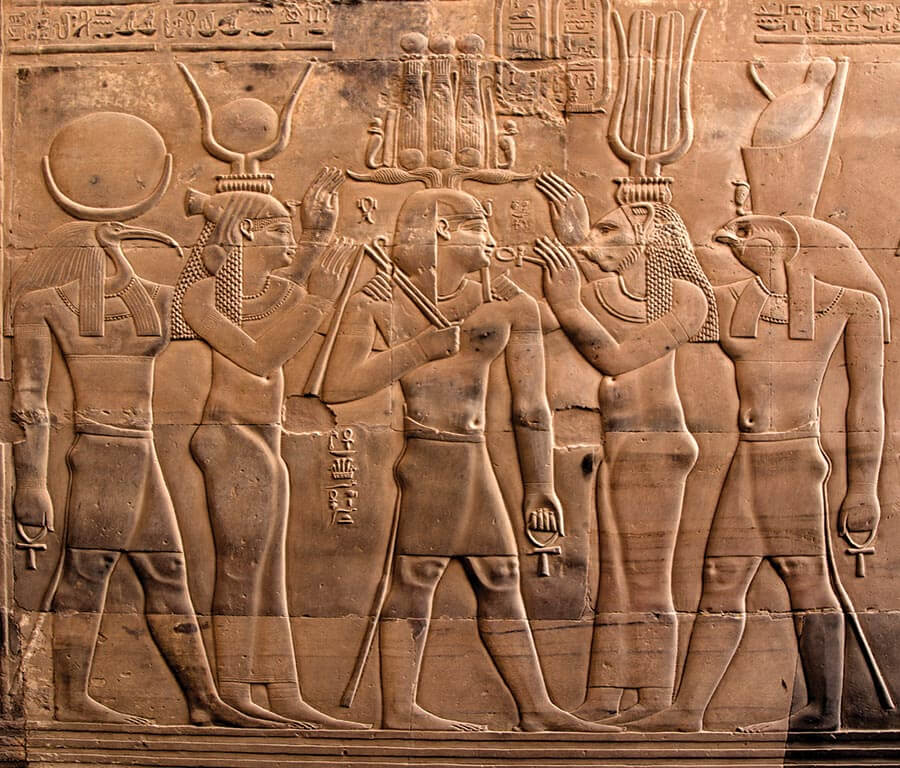 Ma’at wearing an ostrich feather on her head
Artist’s reproduction on papyrus of art from an ancient tomb. 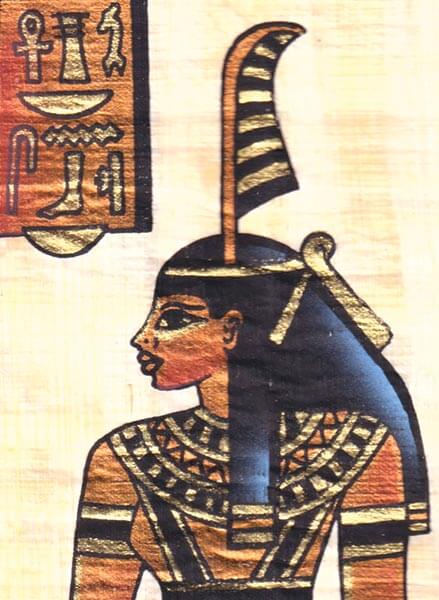 1 The Testament of Job is an imaginative re-telling of the Job story.

3 For an interpretation of their significance in Yahweh’s revelation from the whirlwind, see Job’s Quest, Chapter 22: “Job’s Monsters.”

4 All Scriptural citations are taken from the English Standard Version.

5 Job 28: 6, 16 NIV. Called “sapphires” in other translations. The Egyptians prized lapis lazuli; they used it in their jewelry and as the base for the vivid blue color in their tomb paintings. According to Norman Habel (The Book of Job, 1985) sapphires were unknown until Roman times.

6 “Diamonds are Forever” was the title of a 1956 Ian Fleming novel which was the basis for a 1971 James Bond movie. A similar phrase, “a diamond is forever,” is the advertising slogan for De Beers.

In our reading from the prophet Isaiah, in chapter 51, we find a beautiful message of comfort from God to His people Israel.
Continue Reading
Reflections