Have you ever wondered what those people were doing during those 40 days? 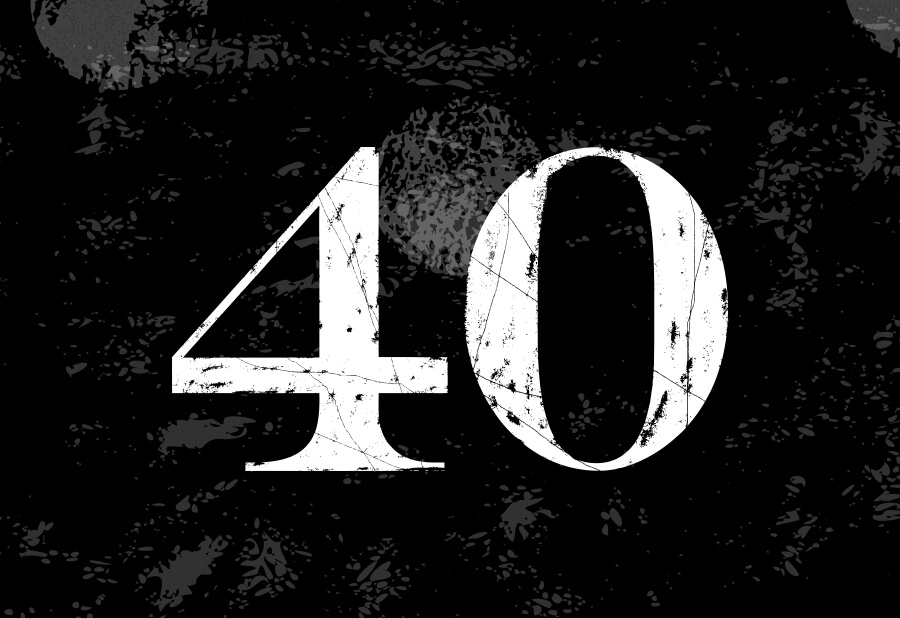 Several times in scripture we find someone occupied with something for forty days-almost six weeks.  It seems clear that 40 is a meaningful number, since it shows up as often as it does.  It is sometimes suggested that 40 is the “probationary” number.  It’s a good fit in some cases, not as good in others.  But whatever the overall meaning of the number is, have you ever wondered what those people were doing during those six weeks?

The Israelite spies checking out the land of Canaan were clearly busy.  The faithless report brought back by 10 of them resulted in 40 years spent in the wilderness, but at least there’s no mystery about what they were doing. (Numbers 13 & 14)

Noah and his family went through 40 days of rain, but that was just part of the 150 days that the water prevailed over the land, and the full year they spent inside the ark. (Genesis 7 & 8)

Moses was up on Mount Sinai for 40 days. (Exodus 24)  This is a case where we might wonder, what did he do all that time?  In fact, he was up there for 40 days twice, with an additional 40 days between them, all of them without food.  After the first time, he found the people had made the golden calf and he broke the stone tablets “written with the finger of God” (Ex 31:18 & Deuteronomy 9:10-11).

And then he “lay prostrate before the Lord” another 40 days! (Deut 9:18 & 25)  During this time one thing he was doing was praying (Deut 9:19-29)  Then Moses went back up the mountain for yet another 40 days, and this time we’re directly told what he was doing: he was writing down all the Law that God gave him, which fills a considerable portion of Exodus. (Ex 34:27-28)

God said He would re-write the Law on new stones, “the same writing as before, the Ten Words” (Deut 10:1-4)  Did Moses do this the first time too?  Did the tablets have just the “Ten Words” (commandments), or was the whole Law on there?  It isn’t real clear.  So what was Moses doing?  For sure, he listened, and absorbed.  I think it’s likely he wrote down the Law, even if God wrote it on stone, I’m inclined to think Moses wrote down a “working copy”.

Goliath taunted the army of Israel for 40 days. (1 Samuel 17)  No question what the Israelites were doing.  They went to the battle line every day, and every day they stopped, immobilized and cowering.

Elijah, nourished by an angel, went for 40 days on that sustenance, to Mount Horeb. (1 Kings 19)  There he experienced the wind, the earthquake and the fire.  Then the quiet whisper of the Lord speaking to him.  The events described don’t seem like they would take six weeks, though.  Even if you factor in travel time.  So what was Elijah doing during that time?  He was despairing of life, we know.  Maybe that’s all he was doing.

And then we come to Jesus.  After his baptism, he was in the wilderness (driven there, we’re told, by the Spirit) for 40 days, facing the temptations to misuse the Spirit he had just been anointed with. (Matthew 4 and Luke 4).  Like both Moses and Elijah, he fasted the whole time.  When we put these various accounts together, we can see that these three, Moses, Elijah and Jesus, stand out from the rest.  For these three, only these three, the 40 days were incredibly intense, they were isolated from everyone else, they were without food or water.  Perhaps this explains why it’s Moses and Elijah with Jesus at the transfiguration.

We return to our question.  What did Jesus do for those six weeks?  We know (in parable form) about what tempted him, but it’s hard to believe that he was just going through those three things over and over for all that time. Did he, like Moses, write himself a copy of the Law? (See Deut 17:18)  Did he, like Moses, pray?  I have to think that he did a lot of that.

Did he, like Elijah, experience the awesome power of the Almighty and then experience the voice of his Father teaching him?  Did he, like Elijah, feel stress over the seemingly impossible course that was set before him?  Elijah despaired, but there isn’t the faintest hint that Jesus did.  Maybe Jesus faced this as a temptation too, and overcame it-something Elijah wasn’t able to do, it would seem.

I’m pretty much just rambling here.  I haven’t had any “aha!” thoughts, other than the strong link among the three who fasted, alone, for 40 days. They prayed (even Elijah).  I don’t know about you, but I can’t pray continuously for days, much less weeks.  Not even hours.  So what did they do?  I don’t know.  In all three cases, though, it was God who called the individual to the isolation, and created the intensity, which must have felt overwhelming to all of them.

Maybe that’s my takeaway.  The writer of Hebrews says, “In your struggle against sin you have not yet resisted to the point of shedding your blood.” (Heb 12:4)  To this I can add, I’ve not yet been called on to the kind of intensity and deprivation that these were called to.  Perhaps the lesson should be this:  Whatever the level of intensity, isolation, and trial the Lord calls me to, if it’s Him calling, then the ability to get through it will be there too.