THE KINGDOM OF ISRAEL RESTORED 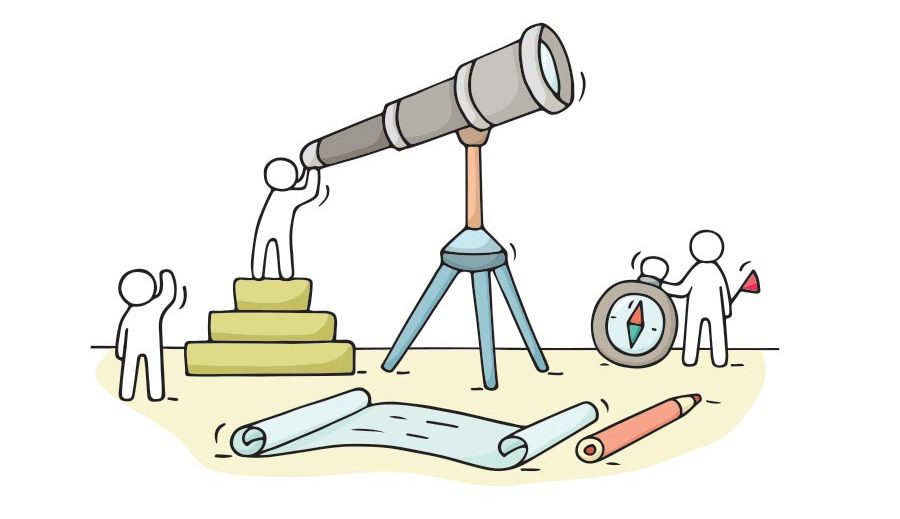 Again, these are fundamental principles of the one true gospel. They are based on, among other Scriptures, the beautiful restoration prophecies of Ezekiel:

“And say unto them, Thus saith the Lord GOD; Behold, I will take the children of Israel from among the heathen, whither they be gone, and will gather them on every side, and bring them into their own land: And I will make them one nation in the land upon the mountains of Israel; and one king shall be king to them all: and they shall be no more two nations, neither shall they be divided into two kingdoms any more at all.” (Ezek 37:21-22).
“And the desolate land shall be tilled, whereas it lay desolate in the sight of all that passed by. And they shall say, This land that was desolate is become like the garden of Eden; and the waste and desolate and ruined cities are become fenced, and are inhabited. Then the heathen that are left round about you shall know that I the LORD build the ruined places, and plant that that was desolate: I the LORD have spoken it, and I will do it.” (Ezek 36:34-36).

These passages are from the second part of the book of Ezekiel, which plays an important role in much of our understanding of end-times prophecy. Ezekiel can be outlined as follows:

Part 2. “Israel of the Future” (Ezekiel 34-48)
A. A prophecy which asserts Yahweh’s kingship against the rulers of the past (34)
B. A two-panel prophecy in which the land of Israel is claimed against foreign occupiers (35:1-36:15)
C. An anthology focusing on spiritual transformation and the blessing resulting from this transformation (36:16-38)
D. The central vision of Israel’s transformation—political and spiritual aspects combined (37:1-14)
C. A sign act on political transformation with another anthology of blessings resulting from the transformation (37:15-28)
B. A two-panel prophecy in which Israel’s security in the land is affirmed against foreign nations (38-39)
A. A vision which asserts Yahweh’s kingship in territorial rhetoric (40-48)”3The phrases “Israel of the Past” and “Israel of the Future” and the chiastic structure for Part 2 above are from Thomas Renz, The Rhetorical Function of the Book of Ezekiel, Brill Academic Publishers, 2002, p. 128.

Part 2 tells how Yahweh will restore and transform His people Israel. As indicated by the lettering in the outline, Ezekiel 34-48 forms a chiasmus whose center is the “Vision of Dry Bones” (Ezek 37:1-14), which represents God’s “resurrection” of Israel, when they have lost all hope:

“Then he said unto me, Son of man, these bones are the whole house of Israel: behold, they say, Our bones are dried, and our hope is lost: we are cut off for our parts. Therefore prophesy and say unto them, Thus saith the Lord GOD; Behold, O my people, I will open your graves, and cause you to come up out of your graves, and bring you into the land of Israel. And ye shall know that I am the LORD, when I have opened your graves, O my people, and brought you up out of your graves, And shall put my spirit in you, and ye shall live, and I shall place you in your own land: then shall ye know that I the LORD have spoken it, and performed it, saith the LORD.” (Ezek 37:11-14). 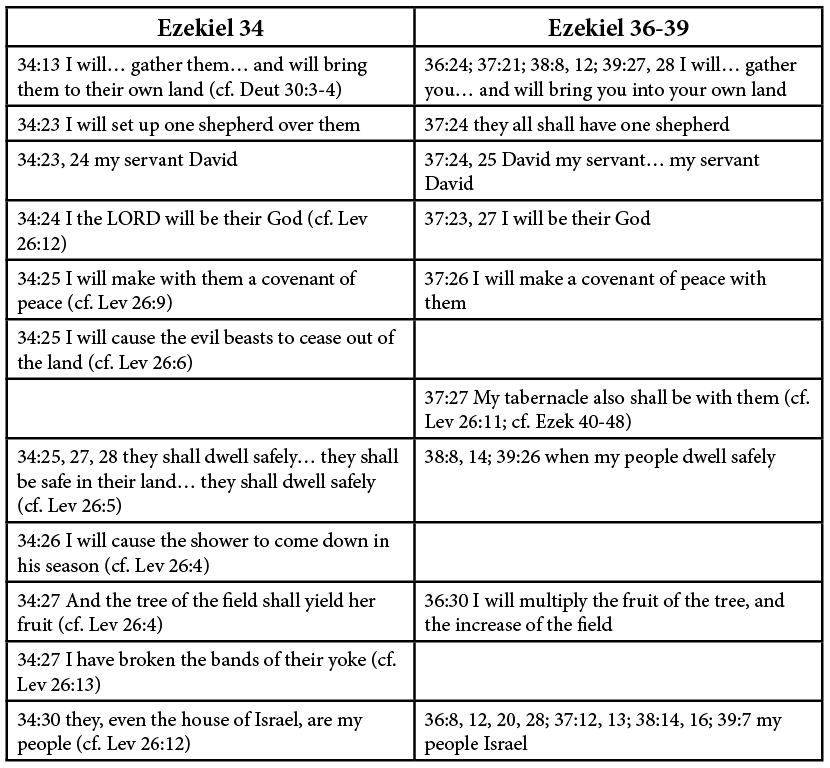 These chapters have to do with the new covenant (cf. Lev 26:3-13; Deut 30:3-4). The above table shows the connections between Ezekiel 34 and Ezekiel 36-39. The references to Israel being Yahweh’s people, who He has gathered back into the Promised Land, and who are now dwelling safely without fear of their enemies are all new covenant themes that continue right on into Ezekiel 38- 39. All of Ezekiel 34-48 refer to Yahweh’s fulfillment of His promised new covenant blessings. The restoration at the time of Ezra, Nehemiah, Haggai, Zechariah, and Malachi was an initial fulfilment of these blessings. The Kingdom Age will be the ultimate fulfillment.

UNCERTAIN DETAIL: WHO IS GOG?

Since Bro. Thomas took Gog (Ezek 38- 39) to be Russia in his book Elpis Israel, this identification has been repeated over and over in our literature and lectures. It is a common interpretation among many Christian groups besides us Christadelphians.

Unfortunately, there are serious questions about its legitimacy, as illustrated by the following quotes from various Bible scholars:

“Certainly… (‘chief ’) is to be connected to… (‘prince’) and is not to be interpreted as a geographical indication… This renders superfluous the various attempts to find an equivalent of [ro’sh]… in the Russians.” (Zimmerli).4Walther Zimmerli, Ezekiel 2: A Commentary of the Prophet Ezekiel, Chapters 25-48, Hermaneia, Fortress Press, 1983, p. 305.
“So it is necessary to repeat that ro’sh meshech (38:2) has nothing to do, etymologically or otherwise, with Russia or Moscow… Gog is further described as ‘chief prince’ of Meshech and Tubal. There are only two proper names here, since ro’sh (‘chief, head’) is nowhere attested as such. It has no more connection with Russia (a name of Norse extraction) than Meshech has with Moscow. There is an evil empire here, but it is not the
USSR.” (Blenkinsopp).5Joseph Blenkinsopp, Ezekiel, Interpretation: A Bible Commentary for Teaching and Preaching, John Know Press, 1990, pp. 181, 184.
“Heb ‘the prince, the chief of Meshech and Tubal.’ Some translate ‘the prince of Rosh, Meshech and Tubal,’ but it is more likely that the Hebrew noun in question is a common noun in apposition to ‘prince,’ rather than a proper name. See D. I. Block, Ezekiel (NICOT), 2:434-35. As Block demonstrates, attempts by some popular writers to identify these proper names with later geographical sites in Russia are anachronistic. See as well E. Yamauchi, Foes From the Northern Frontier, 19-27.” (NET Bible, 1996-2017, translation note on Ezekiel 38:2).

Other possibilities have been proposed. For example, several expositors, including some Christadelphians,6P. Wyns, “An Intertextual Analysis of Ezekiel 38 (Part 1),” Christadelphian eJournal of Biblical Interpretation, Vol. 10, No. 4, Oct 2016, pp. 21-40; hwww.christadelphian-ejbi.org/pdfs/eJournal16q4. pdf. Nathan Kitchen, “Ezekiel’s Gog Oracle,” www.living-faith.org/2019/08/12/ezekiels-gog-oracle/. have connected Gog to Agag (Num 24:7), the king of the Amalekites (1 Sam 15); the two names “Gog” and “Agag” are nearly identical in Hebrew.

Alan Fowler suggested that the initial historical application of Ezekiel’s prophecy of Gog’s invasion of Israel might refer specifically to Haman the Agagite (Esther 3:1, 10; 8:3, 5; 9:24) and his attempt to destroy the nation.7Alan Fowler, “Suggestion: Ezekiel 38-39 Explored,” Tidings, March 2005, pp. 119-125.

Bro. Fowler also linked the other passages in Ezekiel to the time of the restoration. In any case, we should remember that the original setting of Ezekiel was the exile of Israel following the Babylonian destruction of the temple in Jerusalem. This setting should play a critical role in our understanding of his prophecies. With respect to modern day applications, humility dictates that we recognize our limitations in identifying Gog, the chief prince of Meshech and Tubal, and that we refrain from requiring others to adopt our own viewpoints, even if they are traditional. These details are not first principles and we need to be careful not to treat them as such. On a related topic, Bro. Harry Whittaker made a case for a last days’ application of the prophecies about Edom (Esau), Moab and Ammon (Lot), Tyre and Sidon, the Philistines, and the Ishmaelites (Hagar the Egyptian)— e.g., Ezekiel 35-36; Obadiah; Psalm 83—to the modern Arab nations and their hostilities towards the nation of Israel.8See, for example, Harry Whittaker, The Last Days, Chapter 2, “Jew and Arab” (www. christadelphianbooks.org/haw/lastdays/ch03) and Jews, Arabs, and Bible Prophecy. Others have argued against this position, going so far as to say these prophecies don’t indicate a successful invasion of Israel by these nations.9 Don Styles, Israel’s Defeat: by Gog or the Arabs?, Christadelphian Scripture Study Service. Again, it is best to acknowledge our uncertainty about these details.

UNCERTAIN DETAIL: WHEN WILL THESE THINGS HAPPEN?

Another major issue is the question of timing. When will the Gogian host invade Israel? And will they be successful or not? The traditional view is that Gog will invade Israel prior to the return of Christ and that the invasion will be successful. On the other hand, based on the references to new covenant blessings continuing into Ezekiel 38-39 (see table above), others have suggested that this invasion will come after Christ’s return and will be a complete failure.10See, for example, Harry Whittaker, The Last Days, Chapter 1, “The Gog-Magog Invasion. When?” (www.christadelphianbooks.org/haw/lastdays/ch02), and Time of the End, Chapter 18, “Gog of the Land of Magog,” (www.christadelphianbooks.org/haw/timeofend/ch19) Renz shows that Ezekiel 38-39 is a twopanel prophecy each having a sequence of four panels:11Thomas Renz, The Rhetorical Function of the Book of Ezekiel, Brill Academic Publishers, 2002, p. 119.

If this outline accurately summarizes the content of the two chapters, as it seems to do, then there doesn’t seem to be any basis case for a successful invasion. Again, we need to allow for different opinions. We should also think twice about using our own understanding of these prophecies as the basis of our preaching and teaching of first principles. We are completely confident that someday the Kingdom of God will be established on the earth, and it will be the restored nation of Israel. The details of what will happen before that actually happens, and what nations will be involved, is in God’s hands. We must study His word and be prepared as best we can to recognize its fulfillment when it comes to pass. Beyond that, we should be careful not to impose our ideas on others.

“Therefore thus saith the Lord GOD; Now will I bring again the captivity of Jacob, and have mercy upon the whole house of Israel, and will be jealous for my holy name; After that they have borne their shame, and all their trespasses whereby they have trespassed against me, when they dwelt safely in their land, and none made them afraid. When I have brought them again from the people, and gathered them out of their enemies’ lands, and am sanctified in them in the sight of many nations; Then shall they know that I am the LORD their God, which caused them to be led into captivity among the heathen: but I have gathered them unto their own land, and have left none of them any more there. Neither will I hide my face any more from them: for I have poured out my spirit upon the house.” (Ezek 39:25-29).

We may be unsure of some of the details, but the essential principles are plain for all to see, understand and believe!

Brother Roberts' thoughts on reigning with Christ, our summons to Christ at his appearing, immortality, the judgment seat, and responsibility.
Continue Reading
First Principles

The personal return of Jesus Christ to the earth.
Continue Reading
First Principles