150 Years Ago: Perspectives on the Ecclesias in North America at the Time of John Thomas’ Death 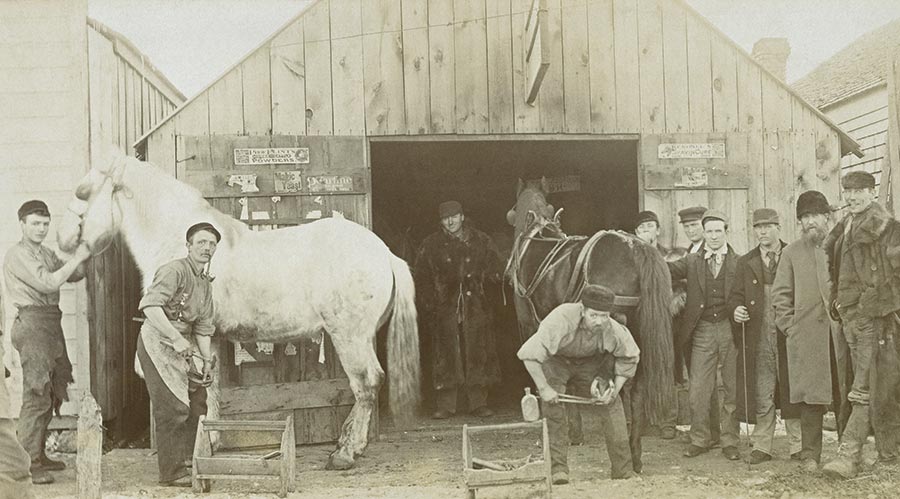 One hundred fifty years ago, this month, on March 5, 1871, John Thomas died, one month short of his 66th birthday. It is not an anniversary this nation remembers, nor do I suspect many Christadelphians do either. But I believe we should acknowledge our indebtedness to him. John Thomas developed his understanding of the Bible through intense studies over almost four decades, from 1832 to 1869. He boldly proclaimed what he had discovered in strenuous preaching efforts, sometimes in the face of intense opposition. He left behind the nucleus of our denomination, which is now spread over the globe. Examining the ecclesial environment in North America at the time of John Thomas’s death and comparing it to the ecclesial world today reveals a great deal.

For a period of two months, he traveled over much of the eastern half of North America, ranging from New York to Ottawa, Ontario, Canada in the North, to Adeline, near Chicago, Illinois in the West, to Virginia in the South, and back to Boston, Massachusetts in the Northeast. He visited 23 ecclesias in all.

He acquired a good sense of the ecclesial situation in this country and probably saw over two-thirds of the total members. He published extensive accounts of his travels in the magazine he edited, The Christadelphian. This information provides us with a good idea of the community’s state in North America in 1871.

Additional information about ecclesias in North America that Robert Roberts did not visit is also available from the intelligence they sent to The Christadelphian around the same time. Taken together, these sources provide reasonably accurate estimates of the numbers of members, and they also yield insights about the circumstances under which many ecclesias operated.

Traveling mostly by train, sometimes by horse-drawn wagon and sometimes by steamer, Robert Roberts endured the heat of early summer and the vicissitudes of travel, often alone, and lectured as many as fifty occasions to audiences, varying in size from very few to many hundreds.

Approximately 500 brethren and sisters heard him, as well as thousands of other interested listeners. He encountered travel problems, difficulties in some of the ecclesias and quite often received critical comments from local newspapers. He gave extensive accounts of his travels in the pages of The Christadelphian, and those accounts consist of almost 55,000 words. (That is more than 25 times the length of this article!)

Many of the ecclesias Robert Roberts visited in 1871 still exist today, but others have dwindled. However, many cities and areas with few members in 1871 have multiple ecclesias today. The Christadelphians in the regions Robert Roberts visited probably number closer to 3,000 at present. It is hard to trace any baptisms directly from Robert Roberts’ visit, but certainly he strengthened the community. In particular, he helped the believers realize they were more than scattered groups: they were part of a larger collection of followers of the Lord Jesus.

For many of the early visits, Robert Roberts was accompanied by Thomas Bosher, from London, England, as well as John Donaldson, of Detroit, MI. However, both men had to leave Robert Roberts in Chicago, so for about the last month Roberts made his way from ecclesia to ecclesia, mostly alone. 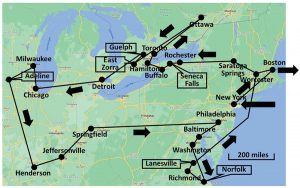 As can be seen in this illustration, Robert Roberts made a vast loop around the Northeast of North America. He had no intent to take such a journey until he reached New York on April 19, 1871, but after arriving, Robert Roberts realized it would be a few weeks before the burial of Bro. Thomas could occur. News of his arrival provoked numerous invitations from ecclesias around North America, and by April 23 he had laid out his itinerary. After the funeral on April 30, he set out the next day, having apparently made all the arrangements by mail or telegram. How did he manage it?! 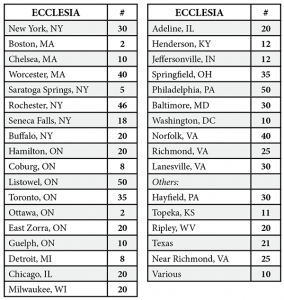 The table to the right shows the ecclesias in the order in which Robert Roberts visited them. There were about 650 members in the ecclesias he visited. With the information we have from other sources, we can assume there were around 750 Christadelphians in North America, including those living near ecclesias and in isolation, alive at the time in 1871.

Many ecclesias were in small, remote communities where some of their members were quite prominent in society. Others were in much larger population centers, where it was, of course, harder to get a hearing from the public. But many of these groups shared a common characteristic: their existence was primarily due to a single individual’s efforts.

In at least two of the ecclesias, a sister was the driving force. (In Saratoga Springs, NY, it was M.G. Walker and in Jeffersonville, IN it was Sallie Botorffe). Of the latter, Roberts commented, “She is a sort of modern Phœbe, in her energy and interest in all things and persons appertaining to the Truth.”

Such backgrounds of the ecclesias Robert Roberts visited provide remarkable illustrations of what a single individual can achieve with drive, conviction and God’s blessing. For example, in Hamilton, Ontario, he learned that Robert Powell obtained 50 subscribers to The Christadelphian through persuasion and enthusiasm for the Truth. Many at this time traced their origin to the preaching travels of John Thomas, but others arose from his writings.

In addition, some, such as the Walkers of Saratoga, NY, moved to the location after conversion elsewhere. In addition to the Bible, the glue holding the community together was The Christadelphian magazine, together with John Thomas’s writings. The majority of the ecclesias were united in the faith and in harmony, but, as is true with all organizations, there were others with internal disagreements, mostly over some aspects of doctrine. 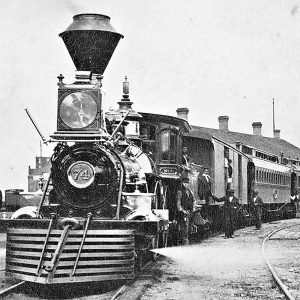 Of the ecclesias of which we have details, Philadelphia was one of the two largest and most organized. It remained so for many years and still thrives, although its location has moved across the Delaware River to Moorestown, NJ.

Essentially, there were two types of ecclesias: those established in major cities, and those in small rural areas. Some rural ones have disappeared—for example, East Zorra, and Listowel, both in Ontario. The latter is interesting because it was the hometown of The Marturion, a shortlived “Christadelphian” magazine that criticized John Thomas and was therefore ostracized by Roberts.

As is true today, the ecclesias of 1871 recognized that there was no higher authority than the Bible. Nevertheless, Robert Roberts had considerable influence as the editor of The Christadelphian. Although the Christadelphians of 1871 did not use a statement of faith like we do today, The Declaration was widely circulated. It was published by Robert Roberts in 1867 with a first printing of 6,000 copies.

Not all the doctrinal difficulties and their causes are known, but there was controversy surrounding two topics in particular:

God Manifestation: There was conflict over the nature of Christ. He was recognized as God, “manifested in the flesh” and acknowledged as “a man tempted in all points as we are.” The controversy in 1871 was over the tendency for some to go too far in the direction of Christ’s divinity by saying he was by nature incapable of sinning, not just that he did not sin.

This problem troubled the ecclesias in Detroit, Adeline, Chicago, and Jeffersonville. This misconception was promoted previously by Edward Turney in England who endorsed similar ideas in what became known as “Renunciation” in 1873. Similar disputes have since arisen, often described as the belief in “Clean Flesh.”

Immortal Emergence: This topic was the subject of a dispute between John Thomas and Benjamin Wilson around 1866. Benjamin Wilson (1817-1900) held that the judgment was to assign rewards, not bestow immortality on the righteous and condemnation on the wicked. This seemingly minor point caused much dissension, particularly in Chicago, but also in Henderson, KY, Baltimore, MD and Norfolk, VA.

John Thomas addressed the issue in his last statement of faith and Robert Roberts did the same in the first Birmingham Statement of Faith in 1868 and The Declaration. In all cases, Robert Roberts either resolved the problem or reinforced those who followed the statements of faith. Robert Roberts sought to ensure that the ecclesias adhered to the true message of the gospel, and he certainly helped in achieving significant unification of the worldwide body. His work helped ensure that when Christadelphians immigrated to North America, as did several of my ancestors, there was often a nearby ecclesia to join. 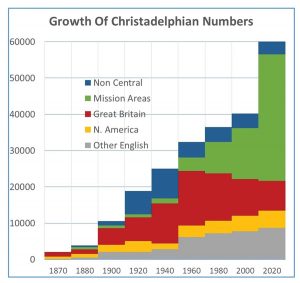 The story of Christadelphians in North America is impossible to adequately cover in the space of one article. The chart alongside shows the growth of the world-wide community: yellow is North America. The progress has been slow, but steady, although the Unamended split off around 1900 and have remained separate.

Despite many attempts at reconciliation, they remain the largest of the “NonCentral” grouping. The chart illustrates that the growth of the Christadelphian community currently is primarily in Africa and India. Within North America, growth was slow and steady through the 1920s, with many moving to create lightstands on the West Coast and the gospel prospering in Ontario, particularly in Toronto and the Hamilton area.

Before 1900, the gospel had put down solid roots in Texas and nearby southern states, greatly aided by Thomas Williams (1847-1913). When the division over what became known as “responsibility” in 1895 occurred, Thomas Williams opposed C. C. Walker (1856-1940), who had essentially taken over the editorship of The Christadelphian. Many ecclesias, particularly in the South and in Ontario followed him.

Afterward, the gospel spread strongly in many areas, but in 1923 the Berean division occurred. This was primarily, on this continent, over the beliefs of Allen D. Strickler, who was accused of promoting the “Clean Flesh” doctrine, but C. C. Walker supported him. The result was a division in basically the whole of the Central community in the West Coast, the Midwest, and much of Ontario for 30 years.

John Carter (1889- 1962), editor of The Christadelphian, brokered a conference which mostly healed the rift in 1952, although a few hundred Berean Christadelphians remain separate. After this, the Central community grew quite vigorously for several years, with many new ecclesias forming in major population centers.

The growth has slowed in recent years, but the United States does not appear to be following the pattern of Great Britain, which was shrinking rapidly until the recent influx of refugees. The map below shows where the Christadelphians are in North America. The two largest clusters are around Los Angeles, with over 500, and a somewhat larger number in and around Toronto. The Detroit area has another 250 or so, and about the same numbers are in New England. We must be grateful for Bible Schools in uniting scattered members—that and our magazines and, more recently, social media. 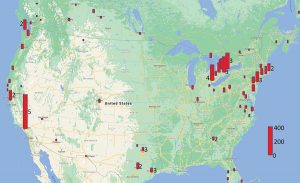 Much has changed in the last 150 years, but the Truth and community that John Thomas established has survived and grown. It is certainly not huge by human standards, but the lightstands he and others established are thriving across North America. We pray that these lightstands may continue to shine forth until our Lord returns.