Back in 2012, Bill Gates declared the book The Better Angels of Our Nature, by Steven Pinker as the most important book he had ever read. In it, Pinker argues that war and violence are declining and that our world is now more peaceful than ever in recorded history. I have read the book, and Pinker marshals an impressive array of statistics in 800+ pages.  His notion has almost become an accepted viewpoint. 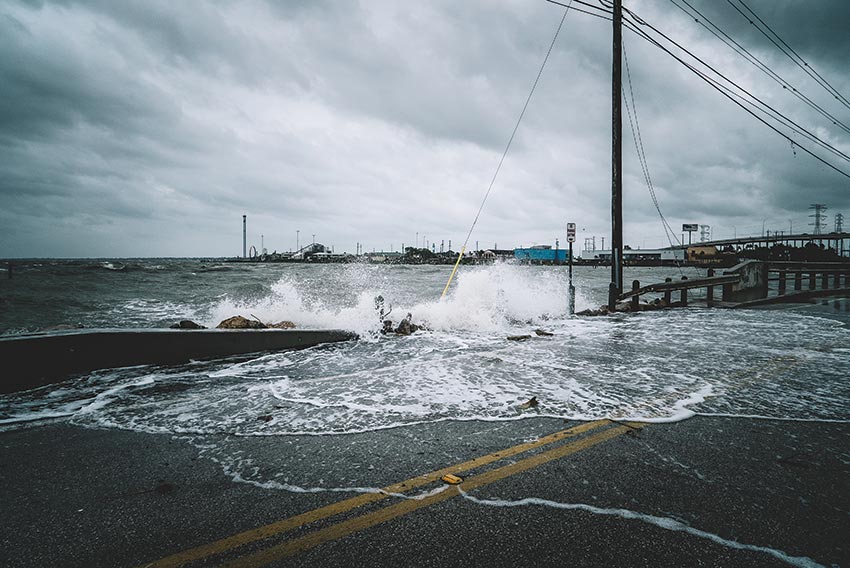 Back in 2012, Bill Gates declared the book The Better Angels of Our Nature, by Steven Pinker as the most important book he had ever read. In it, Pinker argues that war and violence are declining and that our world is now more peaceful than ever in recorded history. I have read the book, and Pinker marshals an impressive array of statistics in 800+ pages.  His notion has almost become an accepted viewpoint.

This editorial is also prompted by my watching a PBS show called “The Violence Paradox,” as I was preparing a class on our beliefs regarding a future kingdom on earth. This is an event we believe will be preceded by a time of severe tribulation. The TV show strongly presented the views of Pinker, yet the world view of our community is one of a current society full of conflict, violence, and fear. Our public lectures, few though they may be in North America, are replete with topics such as “Will There Ever be Peace on Earth?”, and “Why is There so Much Trouble in the World?”.

It must be admitted that the word “Tribulation” is not covered much in our literature, and when it is, the topic is usually regarded as part of our Christian life, as in “…in the world ye shall have tribulation” (John 16:33). So, let us consider the validity of Pinker’s thesis, in contrast with the Bible’s view.

The title of Pinker’s book is taken from Abraham Lincoln’s inaugural address, on the eve of the Civil War. We are told that Lincoln personally1See https://www.the-american-interest.com/2019/07/04/better-angels-in-our-past/ wrote the phrase, in the hope that the internal “better nature” of both Northerners and Southerners would prevail — not from angels ensuring peace in the nation from above. His hope proved in vain, and I believe the thesis of Pinker, of an evolving “better” world, will The world view of our community is one of a current society full of conflict, violence, and fear…prove in vain also. Clearly, the common understanding of most citizens of our nation is a belief otherwise. President Trump’s battle cry “Make America Great Again” would not have resonated so strongly, if the prevailing sentiment were of a better world. Every day, seemingly, we in the USA read about senseless mass shootings, and our children have regular drills. Even our ecclesias have started to be worried about the possibility of violence. And every family seems to expect trouble from strangers. I think back to my childhood, which was frankly a free-range experience: I wandered far and wide as way back as I can remember without a care in the world. Today, you read2Look up Wikipedia on “Free-range parenting”. of parents of children 10 years old being reported for letting their children go to a playground a mile away; of Illinois, which says a child has to be 14 before being left home alone. It makes you wonder how much our world has gotten better, at least in the perception of most people. 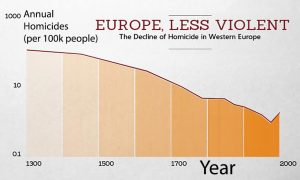 Pinker relies heavily on statistics covering death as a ratio of the existing population, describing the brutality of early tribal society compared to the modern state. He cites the age of enlightenment in the 17th and 18th century as a time when slavery, torture, death sentences for minor offenses etc., were all eliminated. He shows how at least for the last 50 plus years, the major powers have not engaged each other in wars. And how, according to his statistics, the proportion of the populace killed in Europe has declined over the last 700 years,3https://www.gatesnotes.com/About-Bill-Gates/Better-Angels-of-Our-Nature-in-Graphs-and-Numbers?sou_2 as illustrated. You can see the little blip at the end: this is WW2, but after that, the ratio of homicides to population has continued to decrease. Of course, the population of the world has increased greatly, so a catastrophe like WW2, which killed about 50 million, would have wiped out most of the population if it had occurred not long before the birth of Christ.

Pinker has been criticized for his selective use of data, and his heavy focus on the Western world. But the real problem is that, while there is no doubt human knowledge and the associated improvements in technology have continued over time, in ethics and politics there have not been similar advances. Peace and freedom are fragile, and improvements are intermittent and easily lost. War and oppression take over; increase of wealth is punctuated by times of turmoil. The wealth and stability of the Roman empire devolved into the “Dark Ages,” when civilization in most of Europe collapsed. The Chinese empire in its turn was destroyed in the 8th century. It is argued this event resulted in the death of the largest percent of the world’s population ever. Before that, in the 11th century BC, civilization in most of Asia spiraled into turmoil. Many other empires have come and gone (including the British Empire!).

“ ‘When you hear of wars and uprisings, do not be frightened. These things must happen first, but the end will not come right away.’ Then he said to them: ‘Nation will rise against nation, and kingdom against kingdom.  There will be great earthquakes, famines and pestilences in various places, and fearful events and great signs from heaven’ ” (Luke 21:9-11).

The Olivet prophecy had its first fulfillment in AD 70 (and a lesser one in AD 131, when the Jews were finally expelled from Jerusalem). But there is no doubt that Jesus was warning, not only the Jews of his time but also the disciples of the last days, of great tribulation. He also warned, of course, of false teachers, which were prevalent in the Early Church. Whether these false teachers of the latter days are those within Christadelphia or in the larger “Christian” Church is not quite certain, but I believe it is the latter —those demagogues and similar we see and hear from so often in the media, those televangelists with their massive followings — those who falsely claim the Holy Spirit gifts, who proclaim the “prosperity gospel” and who achieve enormous personal wealth by promising great fortune to their congregants if only they contribute money.

As we look back in history, there have been, separately, all the signs promised. World wars, the black death, famines like that in Russia in the 1930s, have all resulted in the death of uncounted millions. But we seem to be promised such catastrophes all occurring simultaneously, which is a frightening prospect. As Luke says

“When these things begin to take place, stand up and lift up your heads, because your redemption is drawing near” (Luke 21:28).

The reminder for us is, as I am sure Jesus intended, of our duty at all times: watchfulness and prayer for our redemption will come when the perils seem worst, when disaster seems imminent.

In the gospel of Matthew, the parable of the ten virgins follows immediately after the Olivet prophecy, with its central message of both watchfulness and preparedness. We do not know when our Lord will come. We only know that disasters, both natural and man-made, are certain before the great and terrible day of the coming of our Lord. We will all know when he actually comes, for:

“At that time they will see the Son of Man coming in a cloud with power and great glory” (Luke 21:27).

Will the “Better Angels of Our Nature” result in peace, and freedom from being killed? In some ways, perhaps a little. But the Doomsday Clock5On Jan 23, 2020 the clock was set at 100 seconds to midnight, the closest ever. is telling us that disaster, both man-made nuclear, and man-induced climate change, pose cataclysmic perils. So, let us watch and prayerfully acknowledge that:

“If those days had not been cut short, no one would survive, but for the sake of the elect those days will be shortened” (Matt 24:22).

Do Angels Have Wings?

Of course, angels have wings! But wait. Not so fast.
Continue Reading
Reflections