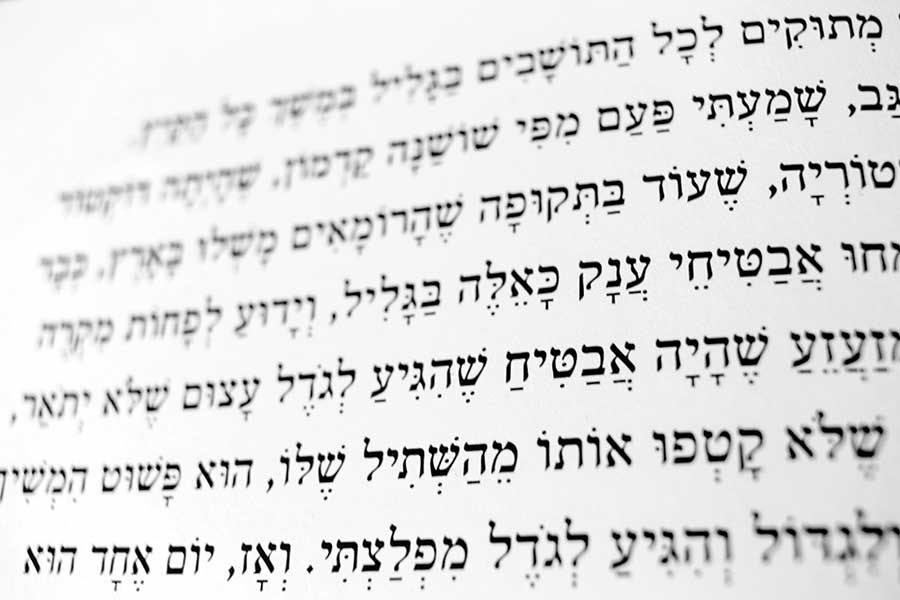 The topic of chiasms has gained interest among Christadelphian Bible students in recent years and for good reason. They help explain the structure of many Biblical texts. When we understand how to find them and interpret them, we can gain some extra insight into the original intent of the author.

But what exactly is a chiasm? To find out, let’s go back in history to a time before the word chiasm was even coined. Ancient Jewish rabbis invented a word to describe the way much of Scripture is structured. That word was atbash, based on the way a cipher (code) was constructed by switching pairs of letters, as below:

In an atbash cipher, a word is encoded by swapping each letter with its mirror image in the Hebrew alphabet. If, for instance, the first letter of the alphabet, aleph, was used in a word, it would be replaced with the last letter, tav. The word atbash itself is an acronym of the first (aleph), last (tav), second (bet), and second-last (shin) letters, respectively.

The rabbis used the term atbash to describe how many scriptural texts similarly mirror themselves, where the first word, phrase or line in a text parallels the last and so on. In time, another word was employed to describe the phenomenon, this time based on the Greek alphabet. That word was chiasm, named for the Greek letter chi, which looks like the English x:

The reason why this letter was used is that it’s a graphical illustration of a chiasm.

The key to the text, however, is what is at the intersection—what is in the middle. There are many examples of chiastic structure in the Bible. For instance, here is a very short one:

The first element in this verse is the word “sheds,” repeated at the end of the verse. Then we have the word “blood” as the second and second-last elements. Finally, in the middle, the third and third-last elements, repeat the word “man.” We can represent the structure like this: 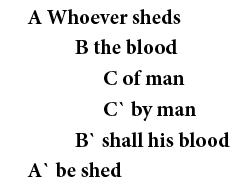 A chiasm helps us understand the importance of repeated words in the Biblical text. While we might think the emphasis is on those repeated words, what often happens is those words are like arrows pointing to what is in the middle of the section.

Reading the Biblical text while understanding the power of chiasms, which are used extensively in Scripture, is a powerful Bible study tool. Next month we’ll look in detail at how to spot chiasms in the text and look at the messages they highlight.

Chiasms don’t change the text’s meaning, but they do enhance the message and highlight the author’s main point.
Continue Reading
Exposition

Proof-texting, where we come already armed with answers, can be like trying to fit a square peg into a round hole. Bible study should be about discovery.
Continue Reading
Exposition

God inspired the authors of the Bible to write down His Word for us, which is clear from passages like Rom 15:4: “For whatever was written in former days was written for our instruction, that through endurance and through the encouragement of the Scriptures we might have hope.” (All quotes are from the ESV.)
Continue Reading
Reflections