Book Review: Within the Camps 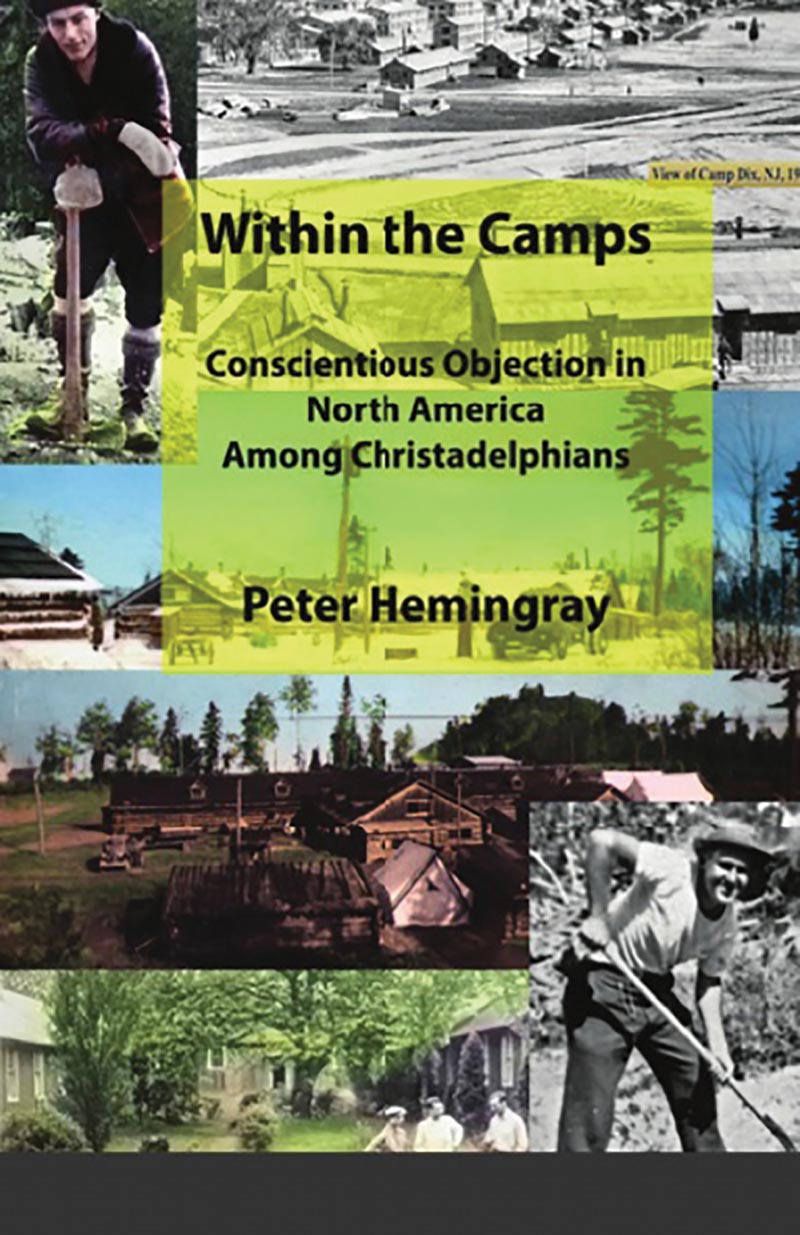 Book Review:
Within the Camps:
Conscientious Objection in North America Among Christadelphians
By Peter Hemingray

The letter to the Hebrews encourages us to follow the example of faithful men and women who embraced the promises of God, and “confessed that they were strangers and pilgrims on the earth.” (11:13). Like them, we are encouraged to leave aside earthly attachments and to,

Many first century recipients of this exhortation made these choices at great personal cost; Hebrews 12:14 (ESV) says, rather ominously, that, “In your struggle against sin you have not yet resisted to the point of shedding your blood.” The persecutions to come, under Nero and Domitian, are horrifying to contemplate. Brothers and sisters in the western world today face little in the way of persecution.

This is a blessing, mostly. But the challenge of living in an affluent, permissive society is to have our vision fixed on the Kingdom, to see clearly. Moses could well have been blinded by the prosperity of his Egyptian circumstances, but instead (in the rich cadences of the KJV) “had respect unto the recompence of the reward.” (11:26). “He endured, as seeing him who is invisible.” (11:27).

It is not that long ago that some of our number took the courageous stand of conscientious objection to military service. It was a difficult decision to take during the Vietnam war, and perhaps even more difficult in World War 2, due to the scale of the conflict and the seeming righteousness of the Allied cause.

The courage of our brethren in those difficult times is worth contemplating. I’m inspired by the examples of my own father (in WW2) and both grandfathers (in WW1). But there are now few brethren alive who have had to face this challenge. Our last surviving conscientious objectors to WW1 fell asleep in the 1990s, and (so far as I know) there is only one from WW2 still alive.

The brotherhood thus owes a debt of gratitude to Bro. Peter Hemingray for his compilation of the history of Christadelphian conscientious objection in North America. Bro. Peter’s thoroughly researched book traces our history of conscientious objection back to the American Civil War, with details on its role in the choice of our “Christadelphian” name.

He traces the legal history of conscientious objection in the US and Canada and the hard work of brethren in gaining our community’s status as religious objectors. The book is seasoned with first-hand accounts of the experiences of our brethren.

Many of the names mentioned will be familiar to us: fathers, grandfathers, and great-grandfathers who “had respect unto the recompense of the reward” and were willing to endure severe difficulties for their faith. Some were imprisoned, a few died; many spent time “within the camps”— performing alternative service with little or no compensation—rather than serving in the military. Many suffered the reproaches of their contemporaries.

More information and where to purchase here:
https://tidings.org/books/within-the-camps/

This is about the Christadelphian Brotherhood in Jamaica over a period of 125 years. It is stimulating and motivating, whether you are an inhabitant or a never-been.
Continue Reading
Life Application

"Autopsy of a Deceased Church": It’s just a little book — only 96 small pages. You can read it in one sitting. But it has an extra-large message. Churches in America are dying, losing members and closing their doors. Why? Is there a set of common characteristics of these dying institutions?
Continue Reading
Life Application

This is a book of poems by Simon Shepherd that is based on Biblical themes and spiritual inspirations that the author has gathered from society, culture, friendships and nature.
Continue Reading
Reflections